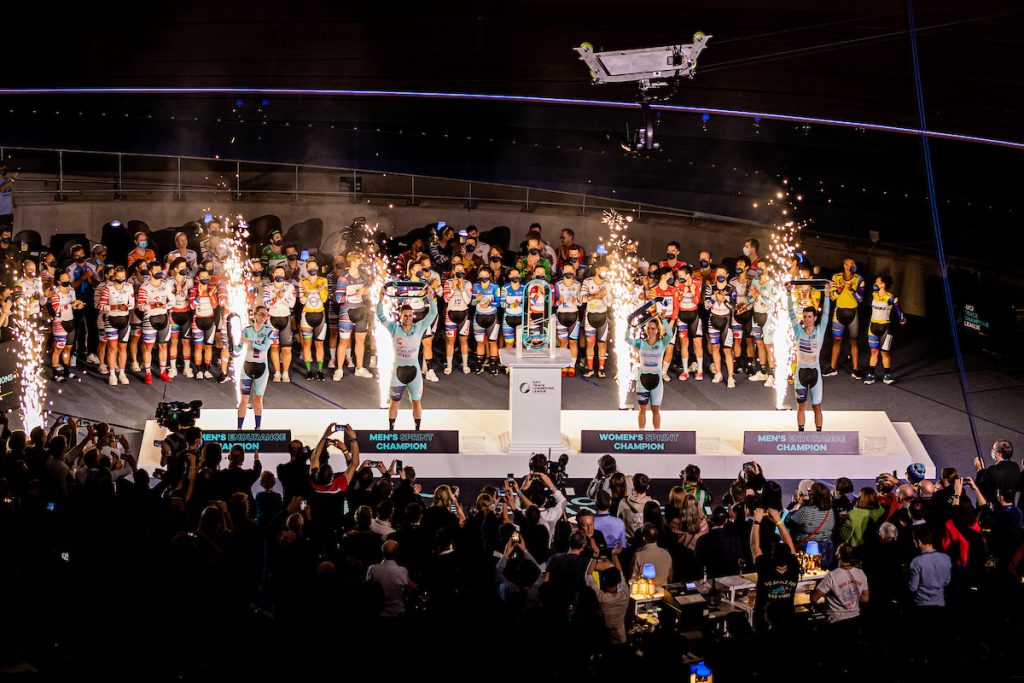 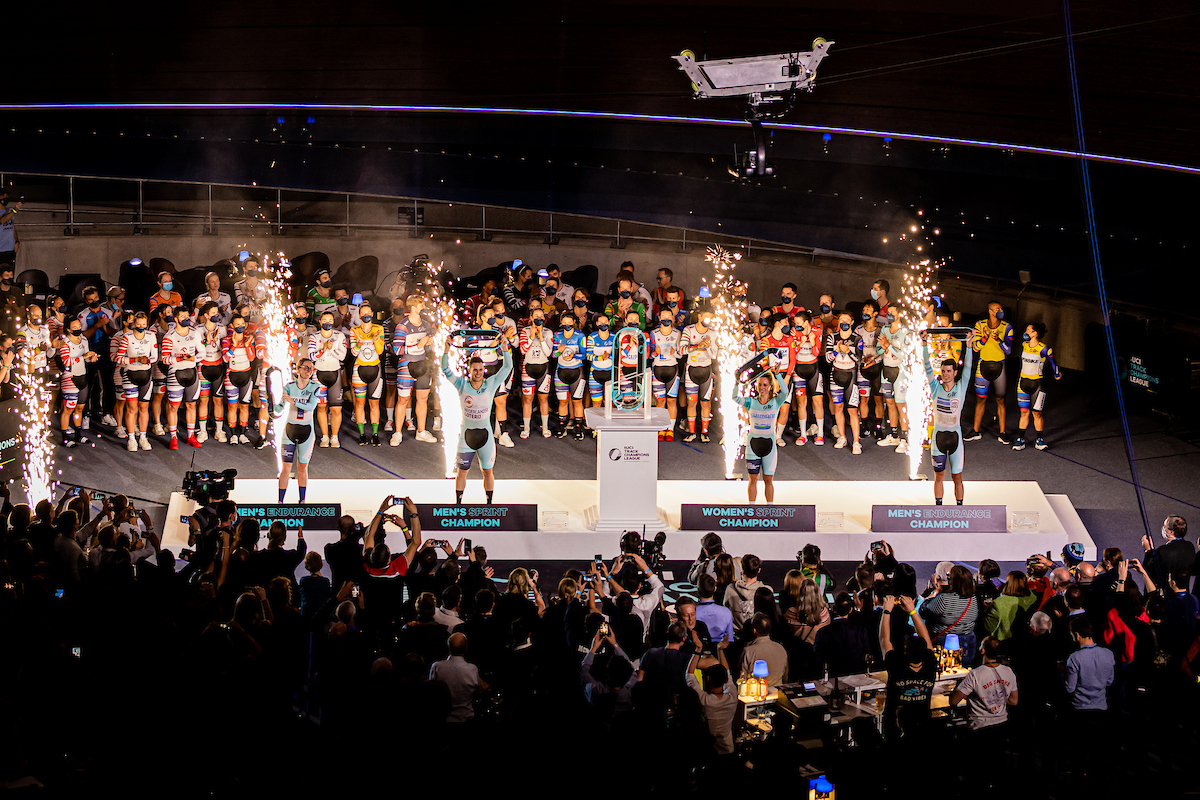 First presented back in March 2020, the UCI Track Champions League was born from a desire – shared by the Union Cycliste Internationale (UCI) and Discovery Sports Events – to tell the story of track cycling throughout the racing calendar and build a broad fanbase for the sport beyond the Olympic Games. An ambitious international competition was devised, with 72 of the world’s greatest riders taking part, viewer-friendly short-format racing, gender-equal prize money and a comprehensive live broadcast schedule all combining to achieve this goal.

Close to two years since its inception, the league now looks back on a highly successful inaugural season that has opened a new chapter for the sport. A field of riders with 63 UCI Track Cycling World Championship titles and 29 Olympic medals between them delivered compelling sporting battles, and in turn, an enthralling visual spectacle. 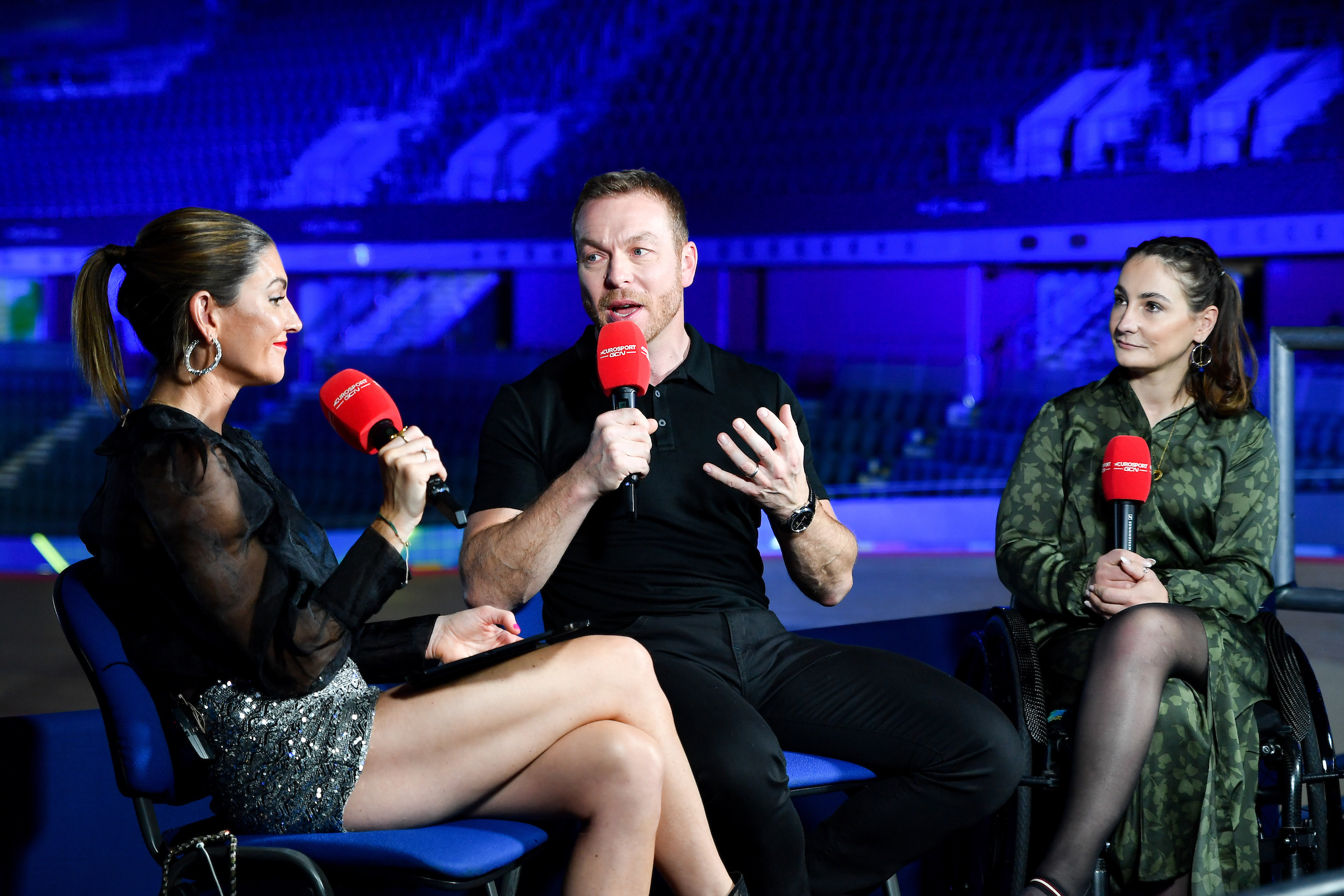 Reflecting on the success of the inaugural season, Kristina Vogel, league ambassador and multiple Olympic gold medalist, said: “On German TV I do a lot of commentating and I know many people who are addicted to track cycling but it’s hard to understand how it works. So I’ve found the league’s short-format good because the races chosen are the easiest and most understandable disciplines. They say in Hollywood that when there’s nothing crazy happening after 1:15 seconds, then the movie is boring. This league is a proper Hollywood movie – second after second something new and exciting happens! People have fallen in love with the racing because it’s so crazy, so dramatic, so good and so easy to understand.”

Chris Hoy, league ambassador and six-time Olympic gold medalist, added: “Speaking to the riders and getting their feedback, it’s clear how much they’ve enjoyed it all. It really does feel like this is the start of something significant. We’ll look back on these last few weeks as significant in the history of track cycling. It’s introduced a whole new aspect of the sport, it’s going to reach a wider audience, and it will only get even bigger and better. Every rider who wasn’t a part of this will want to be a part of it, and all the athletes that were will want to stay a part of it. So there will be battles to make the selection next year and I think we’ll see big names from the road scene join in because the allure is going to become so strong.” 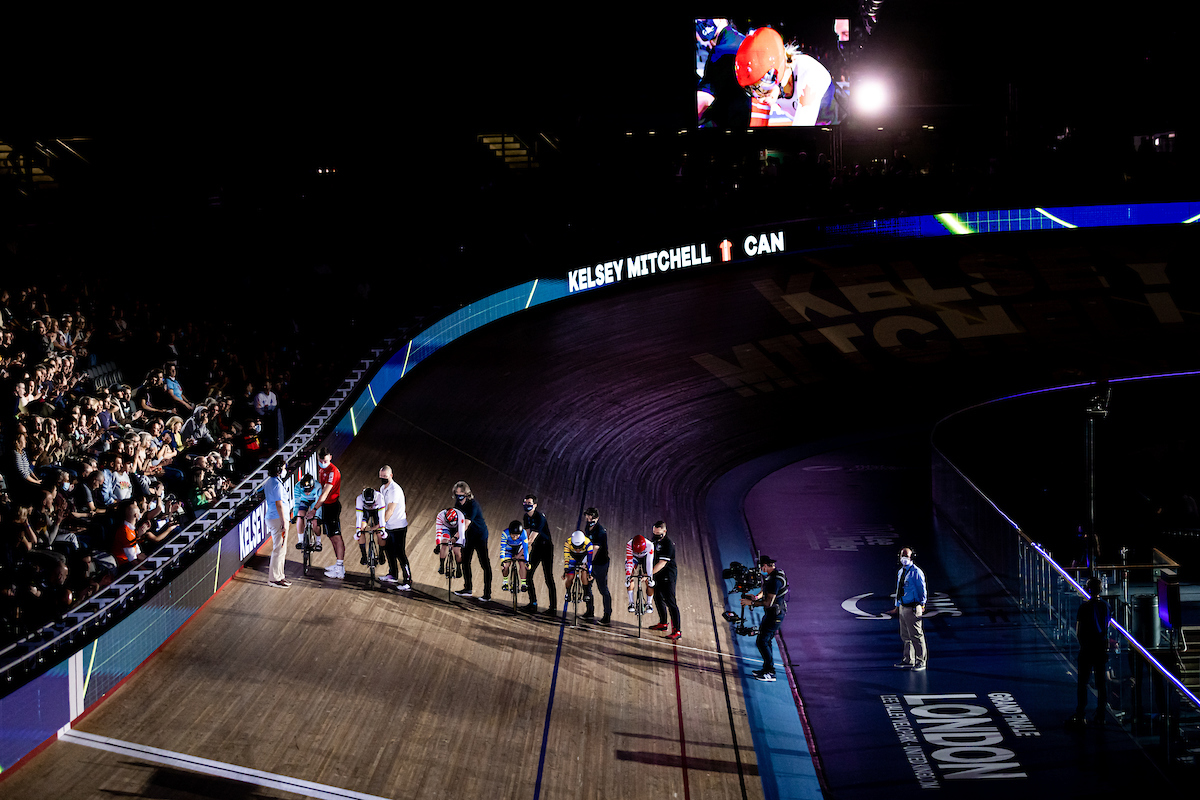 Short-format, High-performance: the Athletic Highlights
Using key data, the league enhanced fans’ understanding of track cycling, and appreciation of the sporting prowess required to excel at this level. Courtesy of AWS, fans were able to dive into the riders’ data via the official UCI Track Champions League app. Alongside a series of staggering power numbers, the highest flying 200m average speeds registered during the league were 73.11kph and 65.72kph in the Men’s and Women’s Sprint leagues respectively. In the Men’s and Women’s Endurance categories, the fastest Scratch races achieved an average speed of 57.41kph and 50.61kph respectively across 20 laps. Japan’s Kento Yamasaki, meanwhile, reached the highest heart rate of the series – 209bpm.

Across all four rounds, 120 races (including heats) took place, with 35 winning riders – indicating a highly competitive field. A total of 824 laps were completed – a combined distance of 206km. 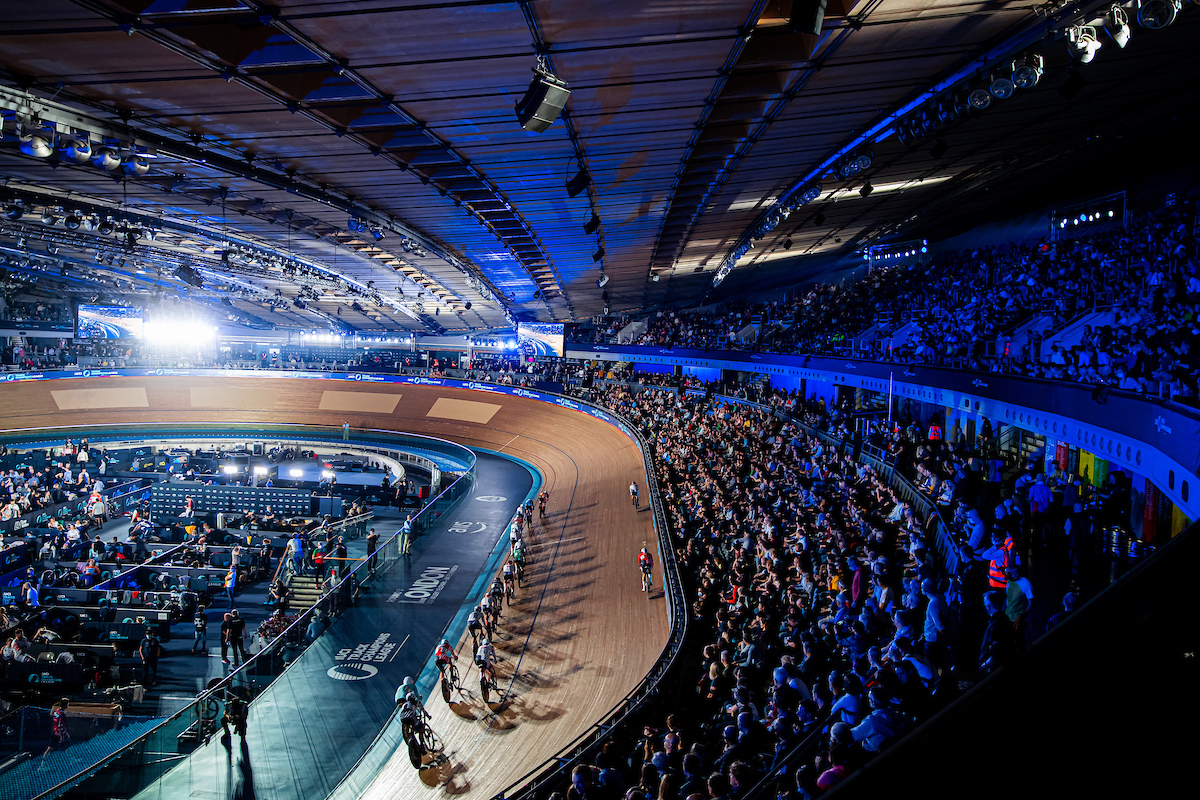 A Worldwide Audience
The league set out to boost the profile of track cycling beyond its traditional audience, and reach millions of new fans with its exciting short-format racing. Televised on discovery+, Eurosport and GCN+ – featuring expert analysis from the likes of Olympic gold medallists Chris Hoy, Jason Kenny and Laura Kenny – alongside a host of international partners, it brought track cycling to the screens of the previously uninitiated.

A total of 149 million viewers were reached across the host Discovery network alone, with 62 hours of programming and 3708 promotional TV spots dedicated to the series. In addition, 26 broadcast partners offered coverage of the league, 17 of which covered each three-hour event live, reaching 206 countries across five continents. 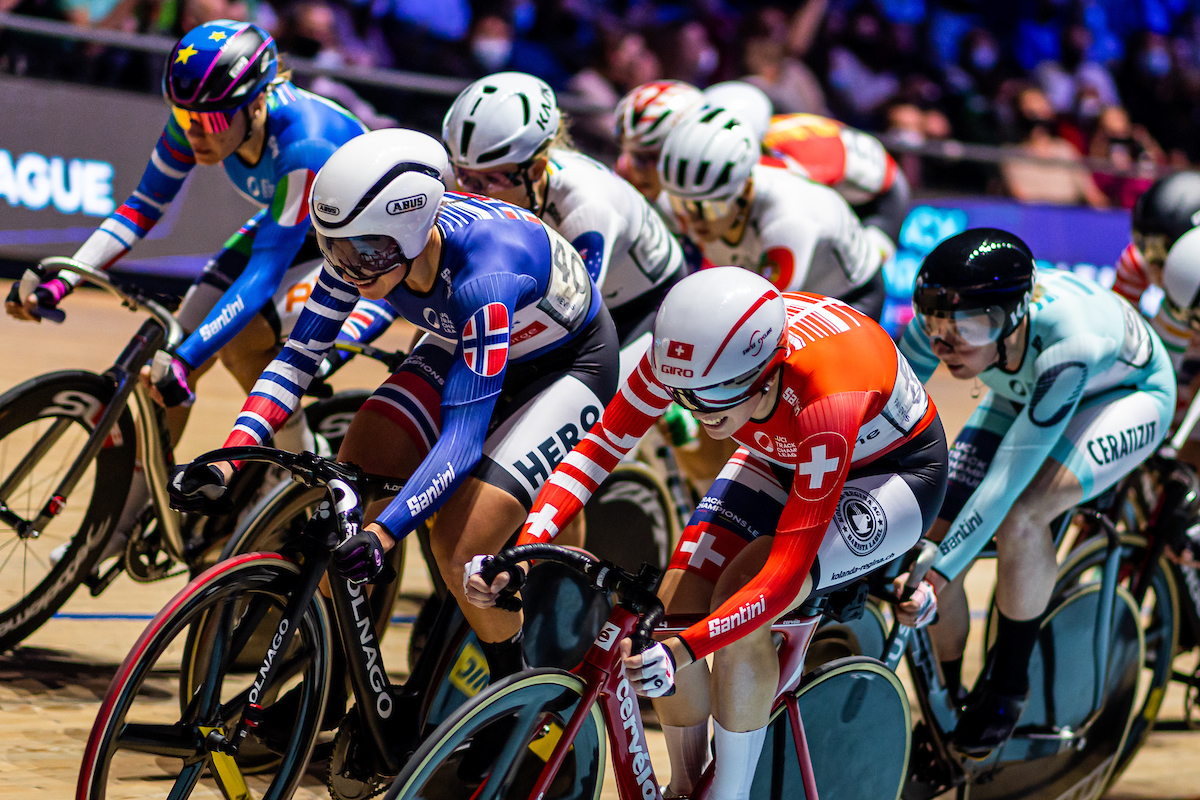 Packed Crowds
Alongside the millions of viewers from home, almost 20,000 spectators packed into the velodromes to watch the racing in person, with three of the four rounds sold-out. A survey of round one attendees in Mallorca, Spain, revealed that a staggering 50% of the crowd had never watched track cycling before – a number that indicates the league’s impressive ability to attract new audiences to the sport.

Social Media and PR Success
In its quest to develop these fresh audiences, the league has also gathered momentum on social media with key footage of sporting content, but also ‘telling the story’ of the racing and behind the scenes.. A total of 14.6 million video views have been accrued over the four rounds of the opening season, with 74.5 million individuals reached across UCI TCL & Eurosport social media platforms. The riders contributed to raise awareness by sharing content to their track cycling fan base, and the power of Eurosport digital channels attracted a wider cycling and mainstream audience. .

The UCI Track Champions League has also enjoyed its fair share of media attention, with around 4500 articles covering the events of rounds one to four, delivering nearly 10 billion opportunities to be seen. The world’s top news outlets and cycling publications all followed the dramatic series and 147 accredited media attended the rounds in person to report on the league.

After a stunning 2021 debut, all eyes are now set on 2022 and the next season of the UCI Track Champions League. 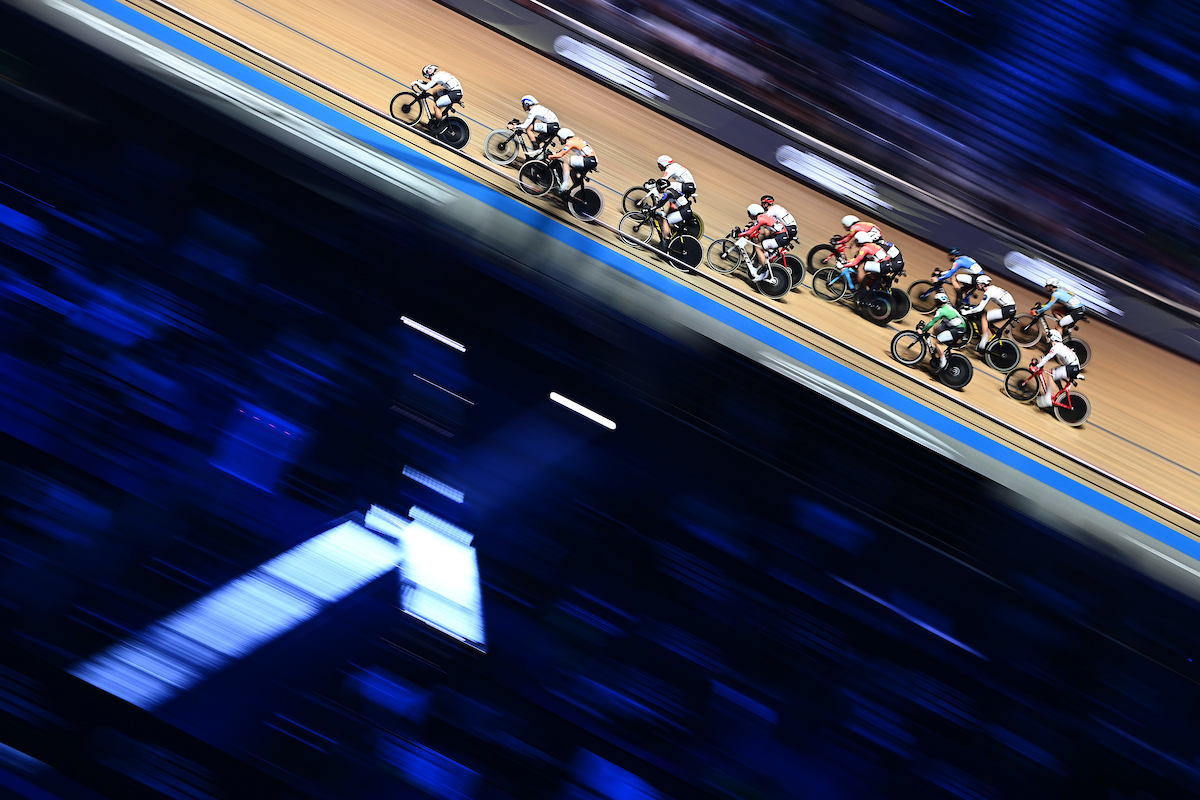 The UCI President David Lappartient added: “The UCI Track Champions League highlighted the best that track cycling has to offer. Speed, intensity, power and tactics came together in each round as the athletes battled for victory and one of the four overall winners’ trophies.

“Even with the forced cancellation of two rounds due to the Covid-19 pandemic, the series provided a clear narrative and plenty of suspense, with fans worldwide eager to see how the action would unfold from one round to the next. The racing was captured in spectacular fashion on television, enabling the whole cycling community to witness the excitement live.

“The aim of the UCI’s partnership with Discovery Sports Events for this series was to generate international fervour, and we have succeeded thanks to coverage on the five continents. I congratulate everyone involved in the organisation, and above all the athletes, who kept us on the edge of our seats during all four rounds. The UCI Track Champions League is already a not-to-be-missed fixture on the UCI Track International Calendar and we can only look forward to the second edition in 2022.” 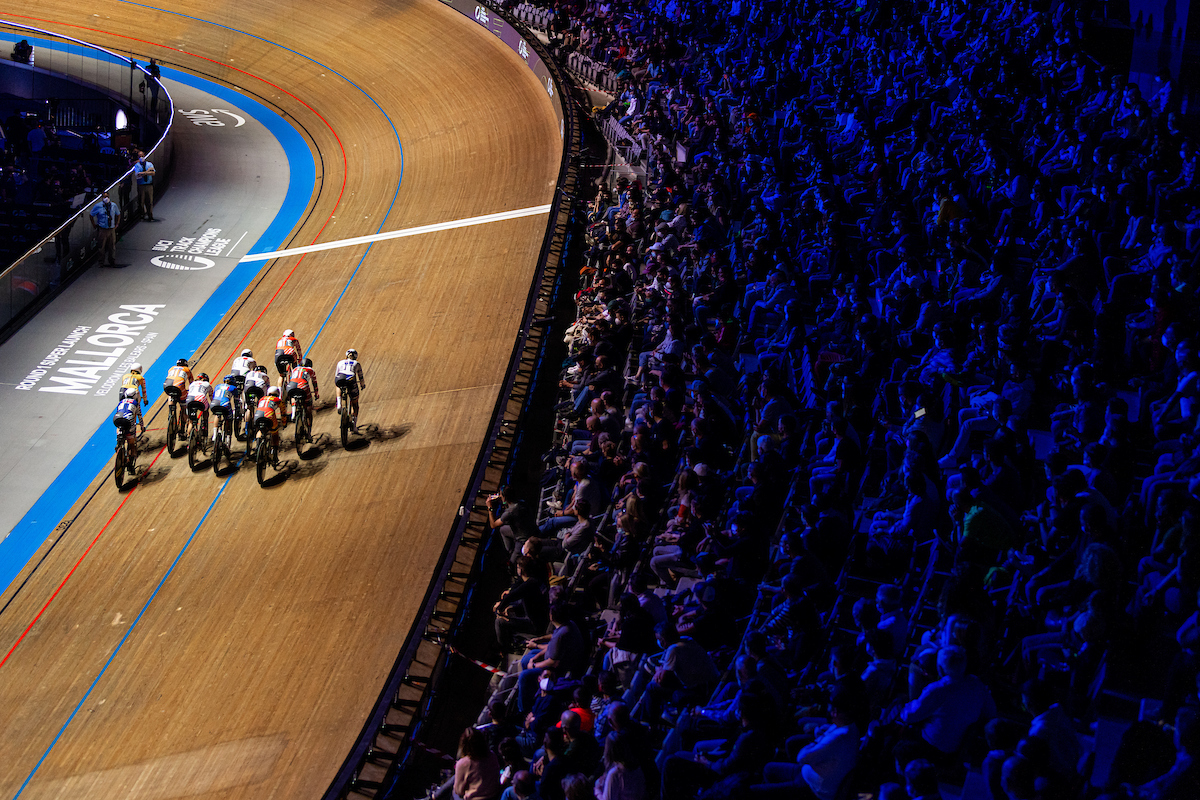 François Ribeiro, Head of Discovery Sports Events, said: “The inaugural season has undoubtedly been a tremendous success, achieved through close collaboration with the UCI. Together we set out to revamp the sport, to bring track cycling to the attention of a new generation of fans through modern technology and comprehensive analytics. We aimed to create a compelling league with the best riders competing, and this is what we have achieved. The UCI has helped us to push the limits of this discipline and create something truly unique in a sport with over 100 years of heritage.

“For many track cycling fans, the true value of the league will be judged on its longevity, and they can rest assured that Discovery Sports Events has committed to the UCI Track Champions League until 2029 at the very least. We are already planning for next year, which is going to be even bigger and even better.”