18 May 2021 – Paris, France: A new chapter in the history of track cycling, set to elevate the sport to a new level of global prestige, was unveiled today with the launch of the UCI Track Champions League. Details of the innovative new series were announced via a live digital event, streamed in duplex from Saint-Quentin-en-Yvelines, near Paris, and Bath, UK.

The elite fan-focused competition, designed to build the global profile of track cycling beyond the four-year Olympic cycle, will debut on 6 November with the first of six action-packed-international events. It will bring a fresh new approach to the track cycling format rooted in driving accessibility and excitement amongst existing and new fans alike.

The launch comes as part of a new eight-year partnership between cycling’s world governing body the Union Cycliste Internationale  (UCI) and Discovery alongside its dedicated event promotion business Eurosport Events, with the objective to develop a year-round narrative for track cycling and further grow engagement around the sport. 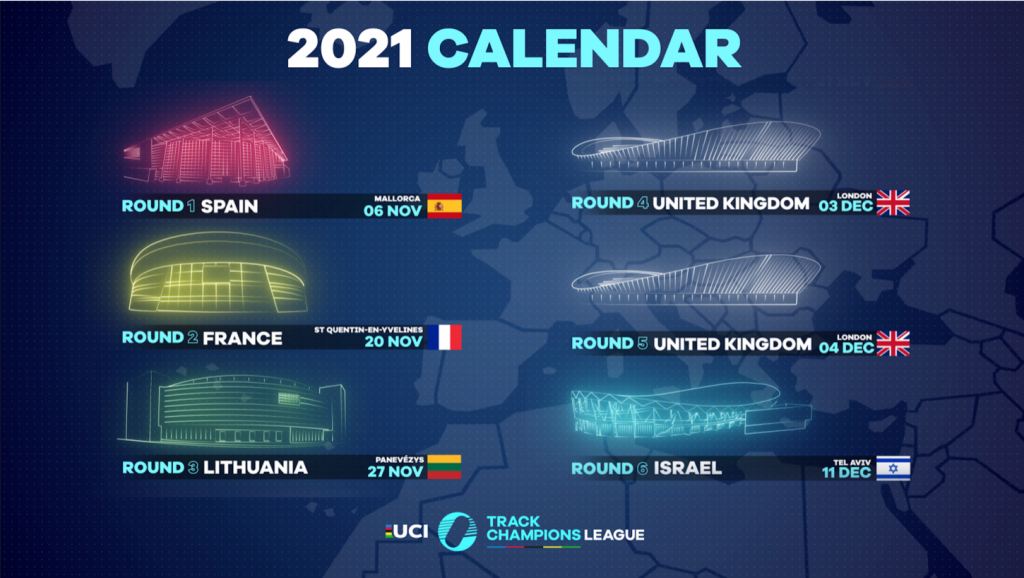 2021 Calendar Confirmed
A condensed, six-round race schedule designed to give track cycling a clear space in the wider cycling calendar, visibility beyond the World Championships and maximum fan engagement:

Round 3 – November 27 – Panevėžys, Lithuania
Cido Arena
The multisport Cido Arena opened in 2008 and is the only Olympic standard velodrome in the Baltic States. The 4230-capacity stadium hosted the 2012 UEC European Track Cycling Championships.

Round 4 & 5 – December 3-4 – London, U.K.
Lee Valley VeloPark
The award-winning Lee Valley VeloPark was constructed for the 2012 London Olympic Games and is renowned for its iconic curved roof design. As well as the Olympics, the venue hosted the UCI Track Cycling World Championships in 2016 and the successful UCI Hour Record attempt by Sir Bradley Wiggins in 2015.

Round 6 – December 11 – Tel Aviv, Israel
Sylvan Adams National Velodrome
The brand new venue is the most advanced cycling facility in the Middle East, funded by Sylvan Adams as part of his vision to nurture homegrown cycling champions in Israel. The venue will host the 2022 UCI Junior Track Cycling World Championships. 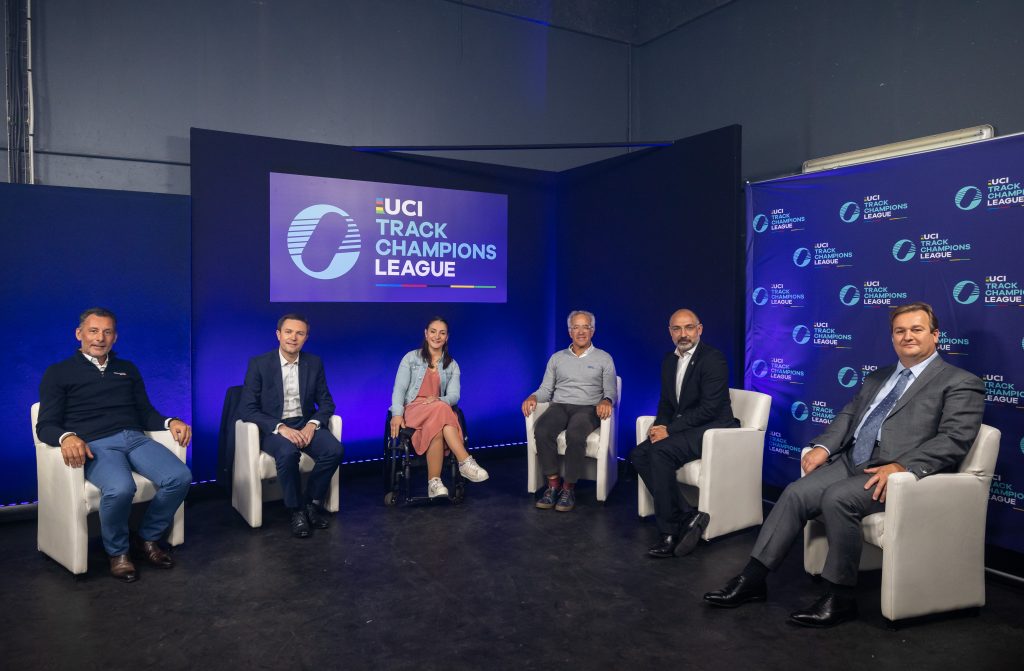 A Unique Sporting Format
The UCI Track Champions League is a league format where every round will feature the same race programme. Riders score points across the six rounds in either the Sprint or Endurance category. Each category has two different types of races in which competitors can accumulate points: Sprinters will race both the Sprint and Keirin while Endurance riders will race both the Elimination and Scratch. 18 riders will compete in each category, totalling 72 riders — equal numbers male and female — to take part in the inaugural UCI Track Champions League.

Rankings within the UCI Track Champions League will be determined by points allocated to riders from their performance in each race. Points will accrue in a league table and the overall winner in each of the categories will be the rider with the most points at the end of the series. At the end of each round the four current leaders of each category (two male, two female) will be awarded the  leader’s jersey to wear at the next event.

Equal Prize Money For Male & Female Athletes
The 36 male and 36 female riders competing for victory in the League’s Sprint and Endurance categories will be motivated by a prize pot totalling more than €500,000. Furthermore, the allocation of prize money will be equal for both male and female riders as part of the League’s commitment to gender equality in the sport, and in line with the UCI’s equal prize money policy across all its events.

Prize money will be awarded for places 1-10 in every race throughout the series, with race winners receiving €1,000. The overall winner of each category will also receive €25,000, with prize money allocated for each place in the overall standings. 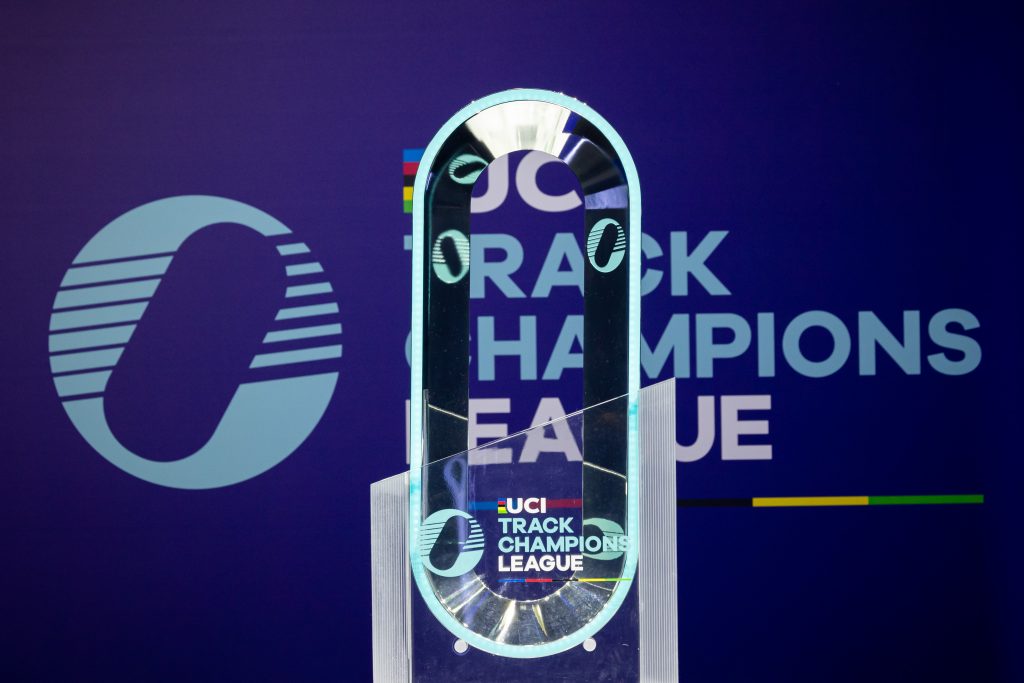 Champions Trophy Unveiled
The UCI Track Champions League Trophy symbolises the innovation and modernity that the new series aims to instill into the sport and its fan experience. The oval design with a futuristic, electric blue LED stripe was born from the shape of the track itself and stands at over one meter high, to become a true emblem of the competition. The name of each winner of the men’s and women’s Sprint and Endurance Leagues will also be etched onto the trophy after the final round, with 4 replicas provided for the winning riders. 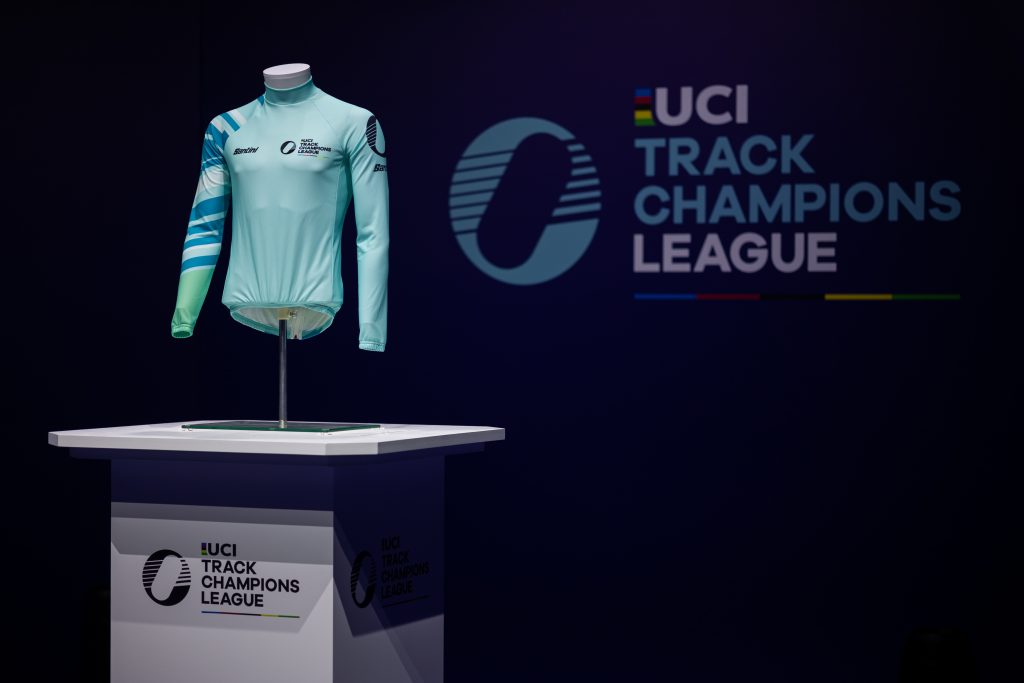 The Santini Leader’s Jersey Unveiled
The jersey, or ‘speedsuit’, is a creation of premium Italian brand and Official Kit Supplier Santini. Santini’s Viper Z2 TT Speedsuit will be worn by the leading male and female riders in the series’ Sprint and Endurance categories. In addition, Santini will also provide each of the 72 riders competing with a custom speedsuit, complete with the rider’s national flag and UCI Track Champions League logo branding. Each rider will keep the same race number throughout the competition and will have their own personal sponsors featured on the skinsuit.

As the League will be held at different velodromes across Europe, riders have been chosen to represent these countries. They have qualified as ‘wild cards’ at the discretion of the UCI Track Champions League, whilst other riders will be invited to participate from their UCI world ranking and performance at the UCI World Championships.

Global Broadcast Distribution
The UCI Track Champions League will benefit from an extensive global broadcast distribution strategy with the aim of reaching and engaging as many cycling fans as possible. The race’s six rounds will be extensively broadcast across Discovery-owned channels including Eurosport, linear TV and streaming plus GCN+ and the GCN Racing digital channels.

As part of the League’s ambition to reach a wider audience for the sport and attract new fans, distribution partnerships with top tier broadcasters have also been agreed. Further details on broadcast partners will be announced in the coming weeks. 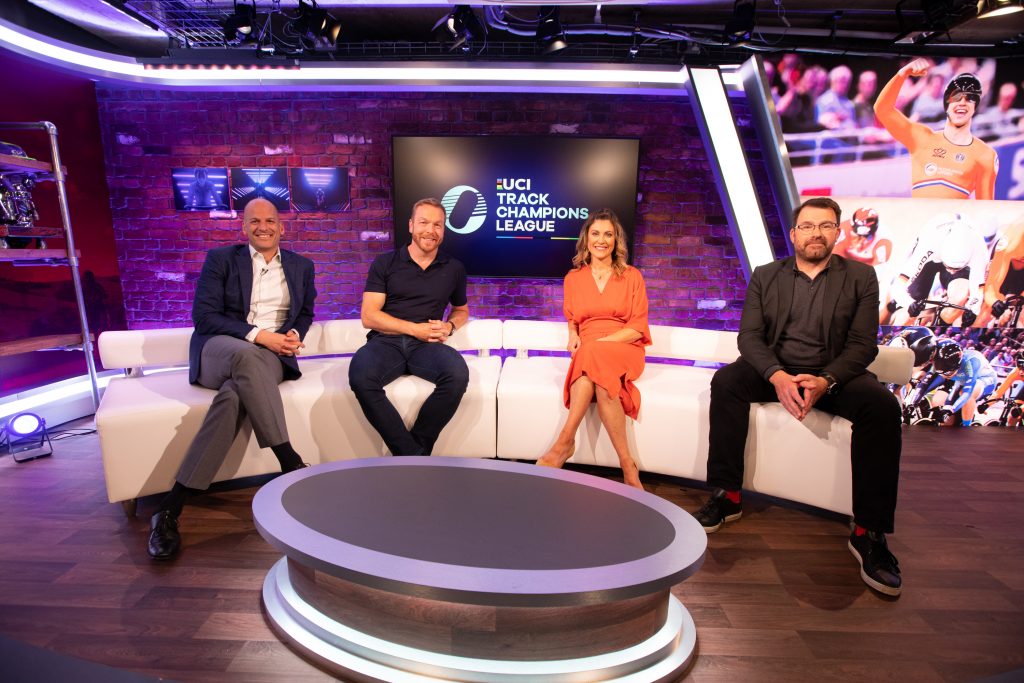 David Lappartient, UCI President said: “The launch of the UCI Track Champions League marks an important milestone in the history of track cycling, one of cycling’s historic disciplines and one that has been part of the Olympic Games since the first modern Games in 1896. Thanks to our strategic partnership with Discovery, a dynamic, fast-paced, television-friendly circuit will reach a new audience of track cycling fans.”

“The discipline now has a compact annual calendar, based on the three highlights of the UCI Nations Cup, the UCI Track World Championships and the UCI Track Champions League. Track Cycling, which has been a resounding success at the Olympic Games, is thus equipped to shine annually during each Olympiad.”

Andrew Georgiou, President, Eurosport & Discovery Global Sports Rights & Sports Marketing Solutions said: “We are privileged to work with such visionary leaders in the UCI and it is hugely exciting to see the UCI Track Champions League come to life. We can’t wait for cycling fans to experience the first round this November, beginning a new chapter for track cycling and using Discovery’s scale and platforms to bring audiences to the sport from all around the world.”

“As the Home of Cycling and Home of the Olympics, Discovery is uniquely placed to build a distinctive year-round narrative for track cycling and tell the sport’s story in a sustained way between and during each Olympic Summer Games. Combining the best of sport and entertainment, featuring the world’s best track riders and teams within this dynamic new format, will set an outstanding stage for the sport.”

François Ribeiro, Head of Eurosport Events, promoter of the UCI Track Champions League said: “Today marks a major milestone in our commitment to cycling. We believe the track discipline is one of the most exciting forms of cycle sport, but as the demands of audiences have evolved, there is an opportunity to present this in a new and highly compelling way. We’ve tapped into our unrivalled expertise in another high-adrenalin form of racing – motorsport – to refine the format and deliver an unprecedented on-event and on-screen experience to cycling fans.”

“The UCI and Discovery announced the launch of the new UCI Track Cycling Champions League in March 2020. By deepening its long-term relationship with the UCI, Discovery is harnessing its global scale, extensive media platforms and promotion expertise to help grow cycling. The management, TV production and distribution of the new UCI series will be entrusted to GCN, in collaboration with Eurosport Events.” 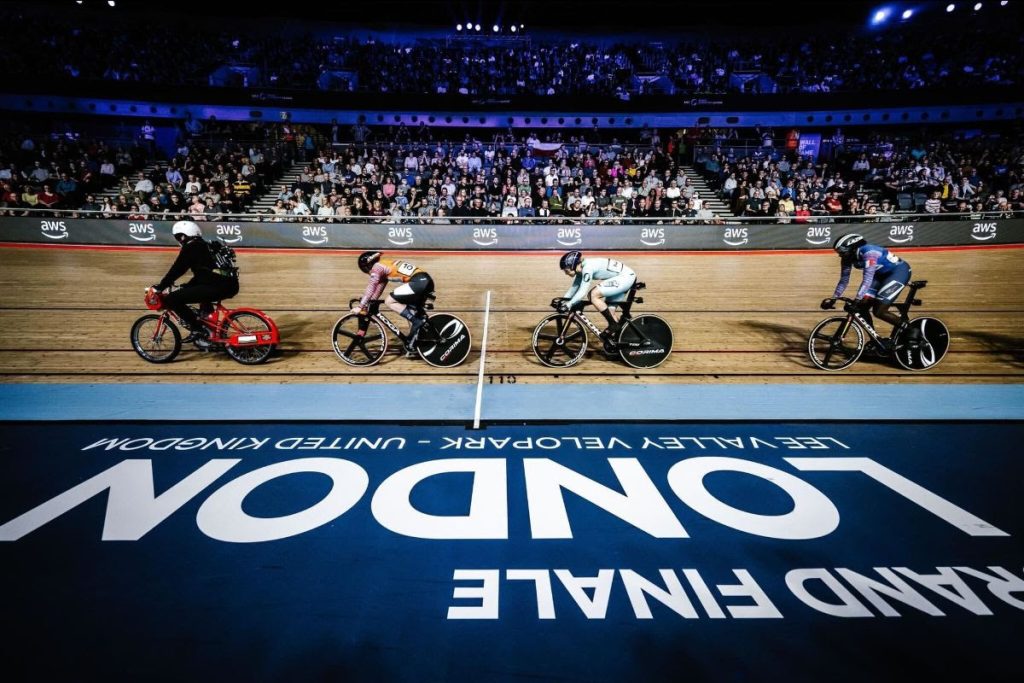 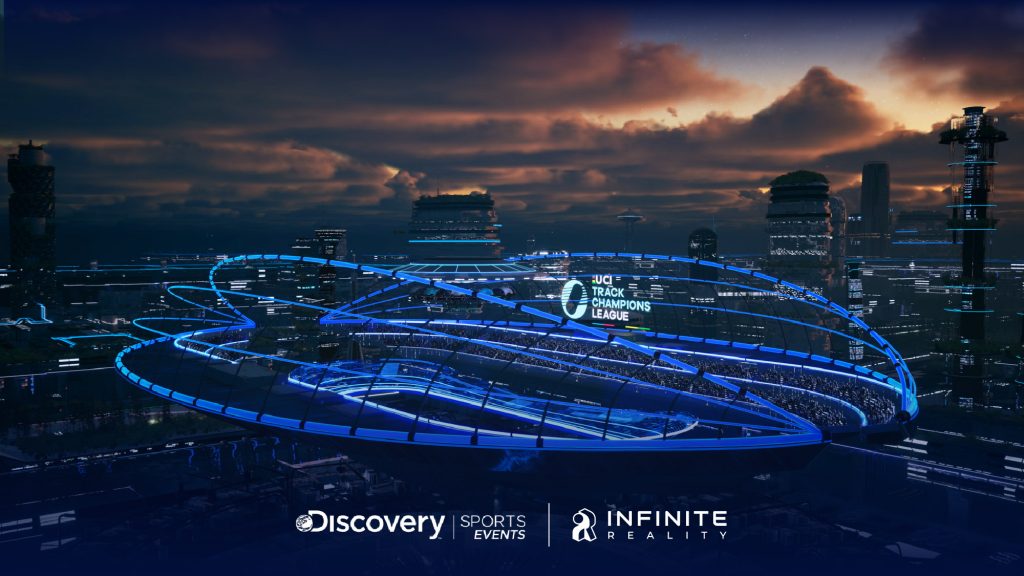