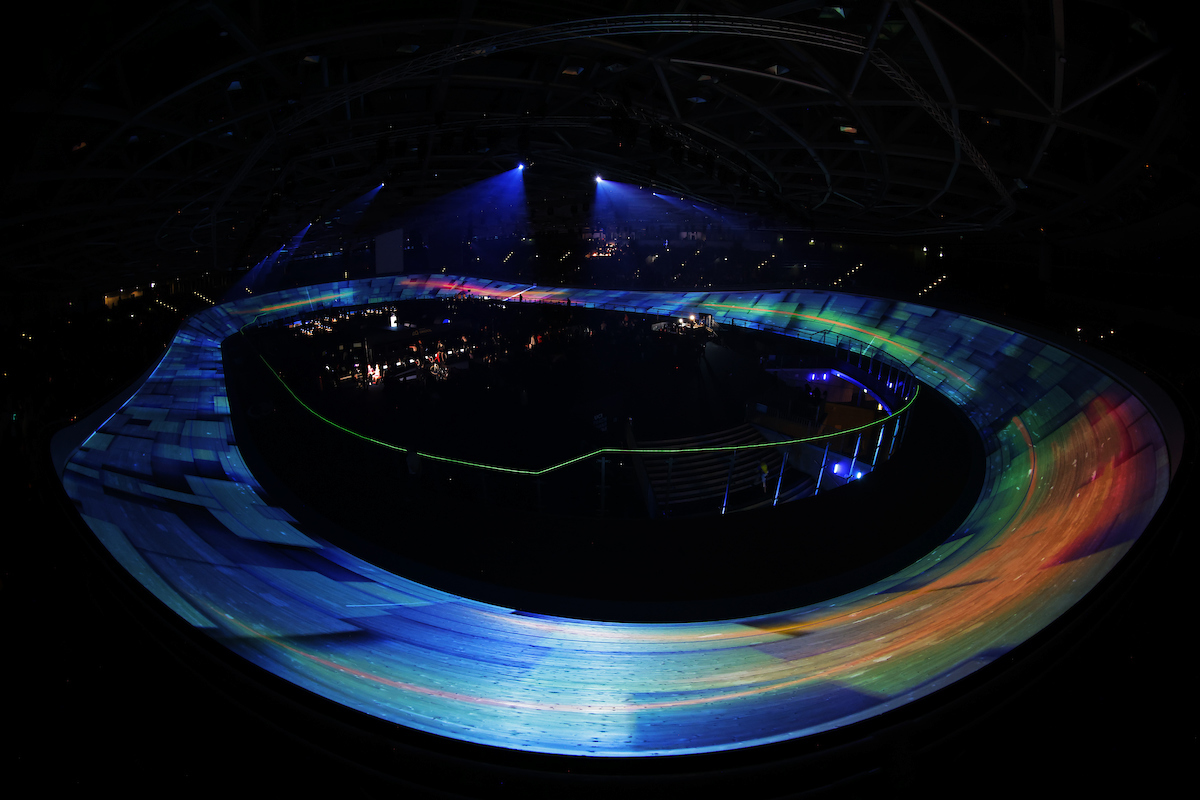 Round 2 in the German capital delivers an evening of fast-paced, exciting and immersive racing.

The partisan crowd inside the Berlin Velodrom provided the riders with plenty of support this evening as a thrilling Round 2 brought about two new blue jersey holders.

In the Women’s Sprint final Canada’s Kelsey Mitchell put the power down with one and half laps to go. A rapid last 200m saw her cross the line first, millimeters ahead of Martha Bayona (Colombia). A photo finish confirmed Mitchell’s win, but second place for Bayona meant she moved to the top of the overall Women’s Sprint standings, knocking Shanne Braspennincx (Netherlands) from the top spot. Bayona now holds a four-point advantage over the previous leader.

As attention turned to the Women’s Scratch, Great Britain’s Katie Archibald and blue jersey holder Jennifer Valente (USA) accelerated with 12 laps to go. Both riders were half a lap ahead when the remaining bunch realised they wouldn’t catch them. As the pace increased with eight laps left, Archibald and Valente powered on, rejoining the back of the bunch with three laps to go, and effectively securing first and second place in the process. It was then that Archibald pressed on whilst Valente tried to eventually take the win. A second place for Valente though, confirmed she had defended her jersey.

In the Men’s Scratch, Germany’s Mortiz Malcharek attempted to bridge to an early breakaway, much to the crowd’s delight. That move mixed things up and caused uncertainty among the leading group. However, Oliver Wood (Great Britain), Claudio Imhof (Switzerland) and Matteo Donegà (Italy) took the lap. A crash with four laps to go saw four riders go down. Unphased by the confusion which ensued, it was Wood who took the win.

Like last week, Matthew Richardson (Australia) and Harrie Lavreysen (Netherlands) once again came head-to-head in the Men’s Sprint final. With a huge amount of pressure on Richardson after beating Lavreysen in Mallorca, the Sprint started with a slow pace, and as things began to speed up Lavreysen looked wary. He tried hard to not let Richardson pass him, but Richardson made an inside move and gained two bike lengths on Lavreysen. Richardson had the power in his legs tonight and beat Lavreysen to the line once again.

In the Women’s Elimination, two of the biggest riders in the League were eliminated early on. Olympic Champion Dame Laura Kenny (Great Britain) was out first, followed closely by last week’s winner Anita Stenberg (Norway), who came in 15th place, surprising the crowd and the other riders. In the closing laps, it was Valente and Archibald who were in contention for the win, closely followed by Rachele Barbieri (Italy). In a tense final lap, it came down to Archibald and Valente, but Valente had lost her strength and Archibald rode to victory, securing two wins in one night, and increasing her lead in the overall Endurance standings.

The tension was high in the Men’s Elimination as the fast-paced group saw last year’s UCI Track Champions League winner Gavin Hoover (USA) eliminated first. Men’s Scratch victor Oliver Wood couldn’t hold it out, finishing in 10th place, followed shortly by Moritz Malcharek, who ended his night with another huge round of applause from the Berlin crowd. Mark Stewart (Great Britain) gave a good effort, ending his evening in eighth place, as a third-place finish for Mathias Guillemette (Canada) saw his overall lead taken away. The final lap came down to William Perrett (Great Britain) and UCI World Scratch Champion Dylan Bibic (Canada), and with 200m to go, Bibic powered ahead, claiming the maximum points and securing his first victory of the season.

The Men’s Keirin final saw yet another battle between Lavreysen and Richardson. With three laps to go no one wanted to make a move, and Lavreysen was in the perfect position to bounce back. He took glory over Richardson, meaning he holds on to the leader’s jersey heading into Round 3.

By not finishing in the top six in the Women’s Sprint, Braspennincx took a huge blow to her overall lead. Although successful in the heat and winning the Keirin, Kelsey Mitchell didn’t make it to the final of the Sprint, and was beaten by half a bike length by Mathilde Gros (France) in the semi finals. The final placed Gros against Laurine Van Riessen (Netherlands), but it was Gros who finished in first place.

Elsewhere, after a disappointing finish in the first heat of the Women’s Keirin, crowd favourite Lea Freidrich (Germany) pulled out of the round due to illness. Her departure provided a huge opportunity for other riders to move up the table. Fellow German Pauline Grabosch also fell out of the running very early on though after coming sixth in the Sprint semi finals, leaving the home crowd stunned.

Tonight’s explosive action and dramatic results pave the way for another gripping Round in Saint-Quentin-en-Yvelines next Saturday (26th November) before the season concludes with a double-header in London on 2-3rd December. 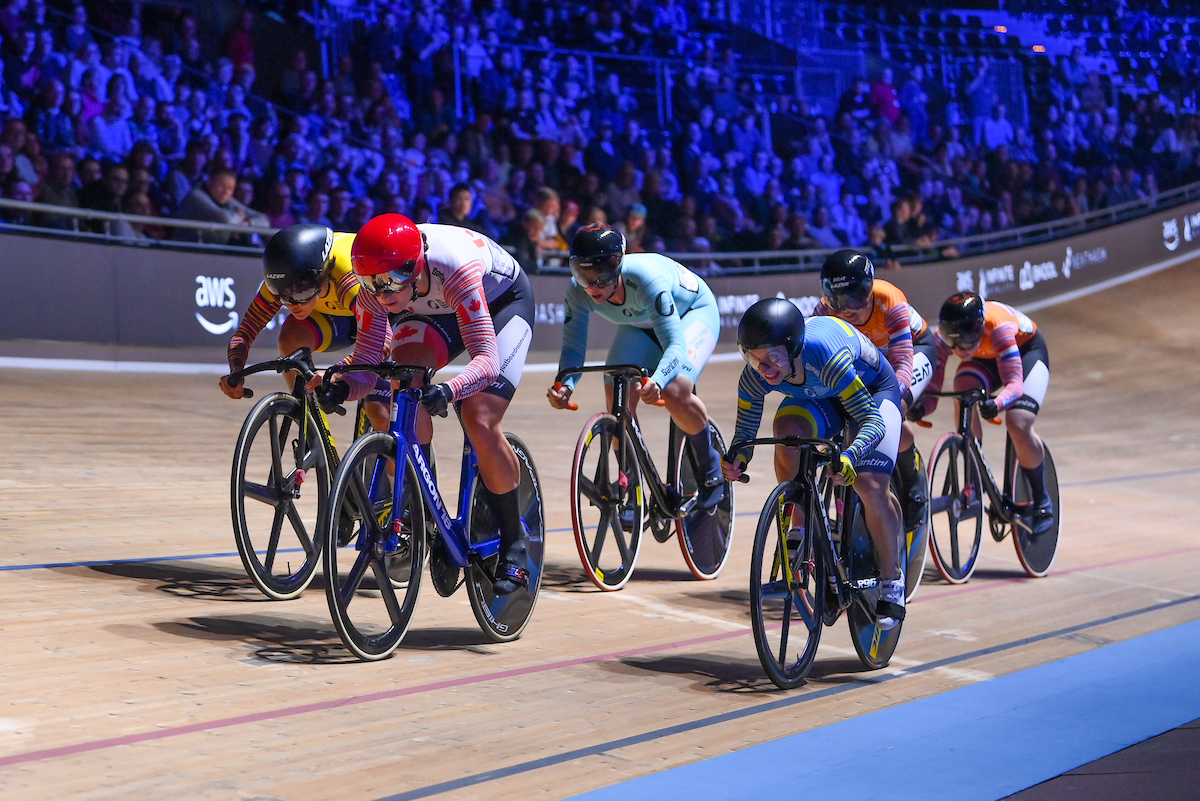 STANDOUT DATA FROM ROUND 2

Olympic Champion Kelsey Mitchell produced an incredible 1,525 watts in the semi-final of the Sprint this evening, beating her previous best by a full 25 watts. Earlier in the night the Canadian star had won the Keirin with a 1,346 watt effort, but in the Sprint final she was defeated by Mathilde Gros, who also set a new record herself, achieving a maximum heart rate of 204bpm.

In the Men’s Endurance meanwhile, Matthijs Büchli (Netherlands) demonstrated his raw power in the Elimination, producing a maximum effort of 1,385 watts. That proved enough to survive the early withdrawals, but the Dutch rider couldn’t make it into the top six and his maximum heart rate of 186bpm fell far below his maximal potential of 201bpm.

*All data metrics provided by AWS. 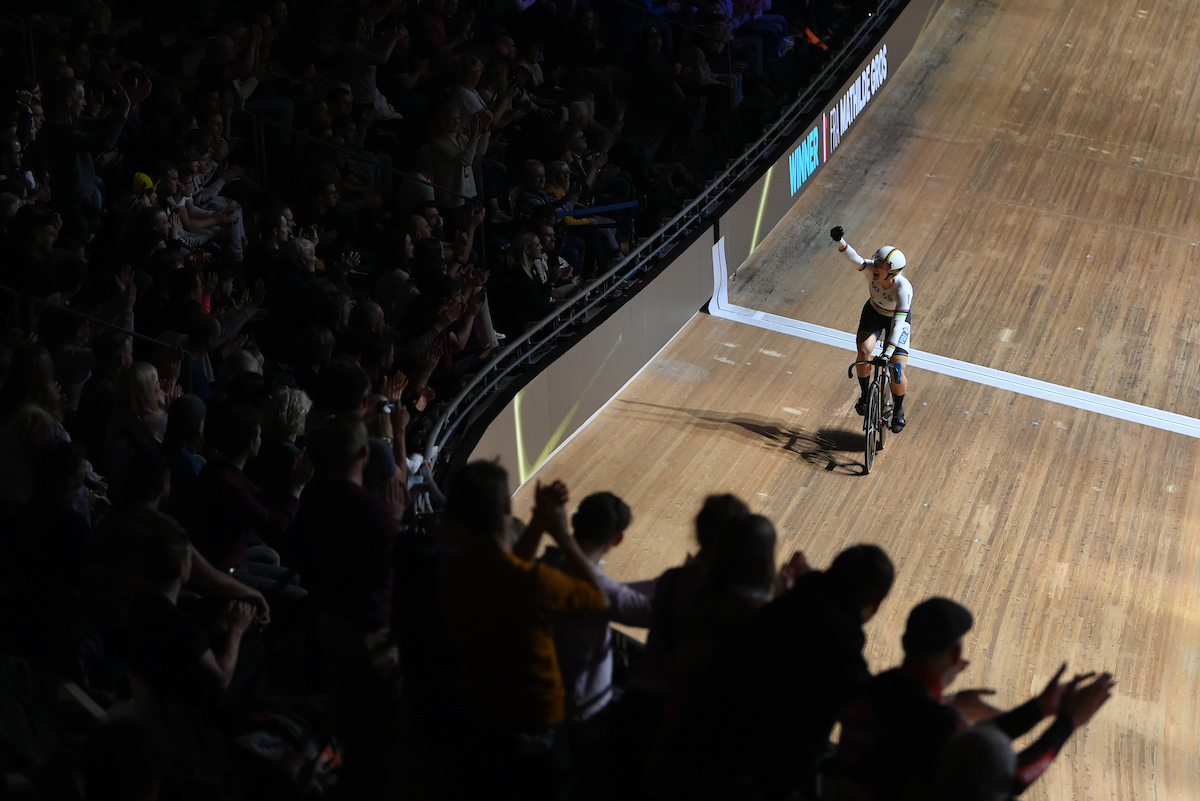 Women’s Keirin winner Kelsey Mitchell said: “I’ve got great memories from Berlin and it was nice to be back. Normally I would just try and hold onto the line, but tonight, I felt like I had a great strategy. I tried to draft, and it ended up working out. I’m really happy to walk away with the win in the Keirin.”

Women’s Sprint winner Mathilde Gros said: “I don’t believe it. I am really happy. It was a hard race with strong girls. Thank you so much to the crowd here, the support was fantastic and I am really excited to race in Saint-Quentin-en-Yvelines. The Tissot UCI Track World Championships was one month ago, and all my friends and family will be there and I hope lots of people come to watch the UCI Track Champions League.”

Women’s Scratch and Elimination winner Katie Archibald said: “The Scratch was really tough. I wanted to attack early, but then I thought ‘I’ll hold back’. Suddenly Jennifer Valente rode over, and from my seat it looked like she might decide to go when no one else could. She came with me, and we had to commit. I was thinking I’ll take a gamble and made my move. When we got the lap, I felt a bit more confident. The Elimination was also a hard race until the very end. However, tonight has gone brilliantly and two wins feels amazing. I feel like I’ve come in with a super power. I always love riding here in Berlin, I adore it. The crowd tonight was fantastic. I’m very happy to be back in the mix in the Endurance league.” 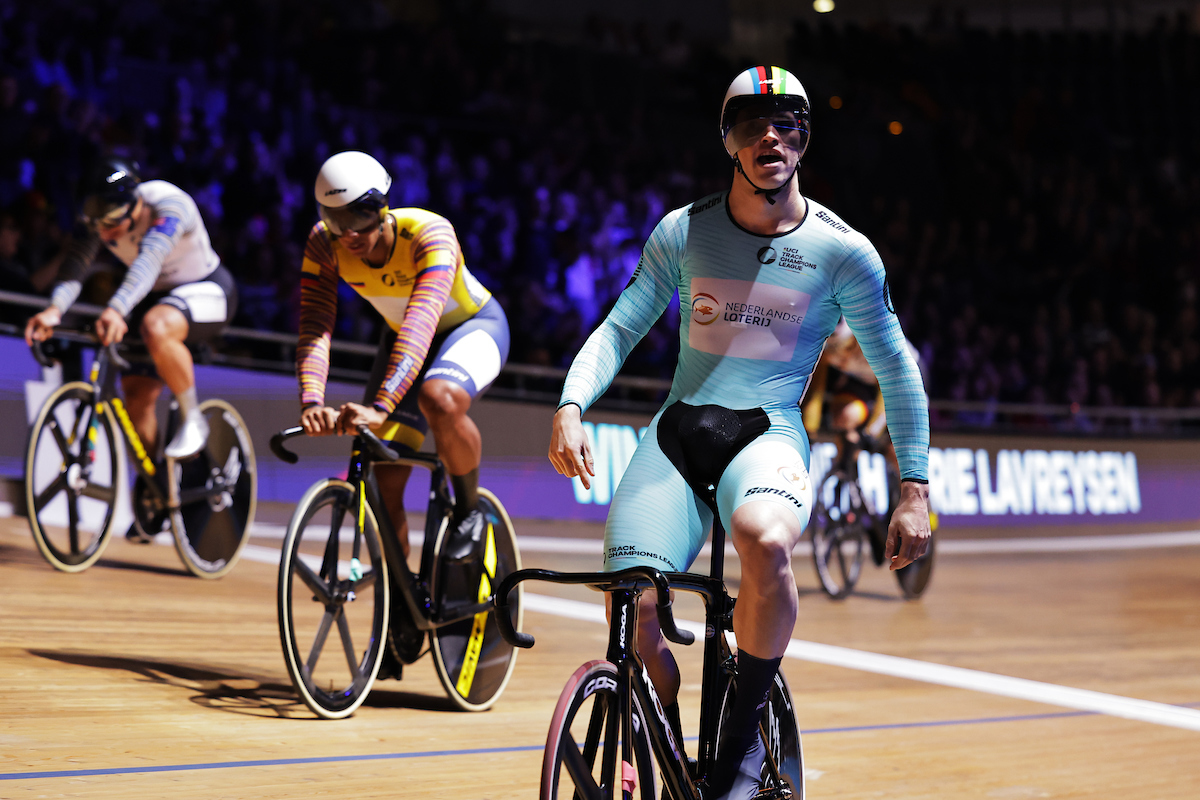 Men’s Keirin winner Harrie Lavreysen said: “I started the evening with the Sprint, missing out to Matthew Richardson in the final, but in the Keirin, I made some great tactical manoeuvres and secured my win. Tonight has been really cool. I made some mistakes but I hope I get my revenge in the Sprint next week.”

Men’s Sprint winner Matthew Richardson said: “I tried to use the same tactics as I did last week. Even if Harrie Lavreysen knew what I was going to do, it was the only thing I saw working. I stayed close and looked for a move underneath him. I got underneath and just went for it. It was a great race.”

Men’s Elimination winner Dylan Bibic said: “I knew from the first Elimination race in Mallorca who were going to be the challengers, and I played the game right until the final. It came down to four riders, I knew I had to give more energy, and then when it was just the two of us, I knew I was going to win. I’m looking forward to racing in Saint-Quentin-en-Yvelines.”

Men’s Scratch winner Oliver Wood said: “I just got into a lucky move. Claudio Imhof was strong, but I played my cards right. I was pretty cooked, but I tried to place myself correctly for the sprint. I kept my eye on my shoulder, to see the other two riders, but they weren’t there. It feels great to win in front of a velodrome full of this many people.”

Francois Ribeiro, Head of Discovery Sports Events, said: “Just like in Mallorca, we were treated to another incredible night of action here in Berlin, and I am proud that we’ve been able to bring the UCI Track Champions League to Germany for the very first time. It was great to see fans of all ages cheering the riders on and the atmosphere inside the velodrome was fantastic. That support is infectious and it certainly added to the intensity of the racing. The overall standings are also beginning to take shape now and I’m already looking forward to Round 3 in St-Quentin-En-Yvelines next Saturday to see how the next chapter of the 2022 season plays out.” 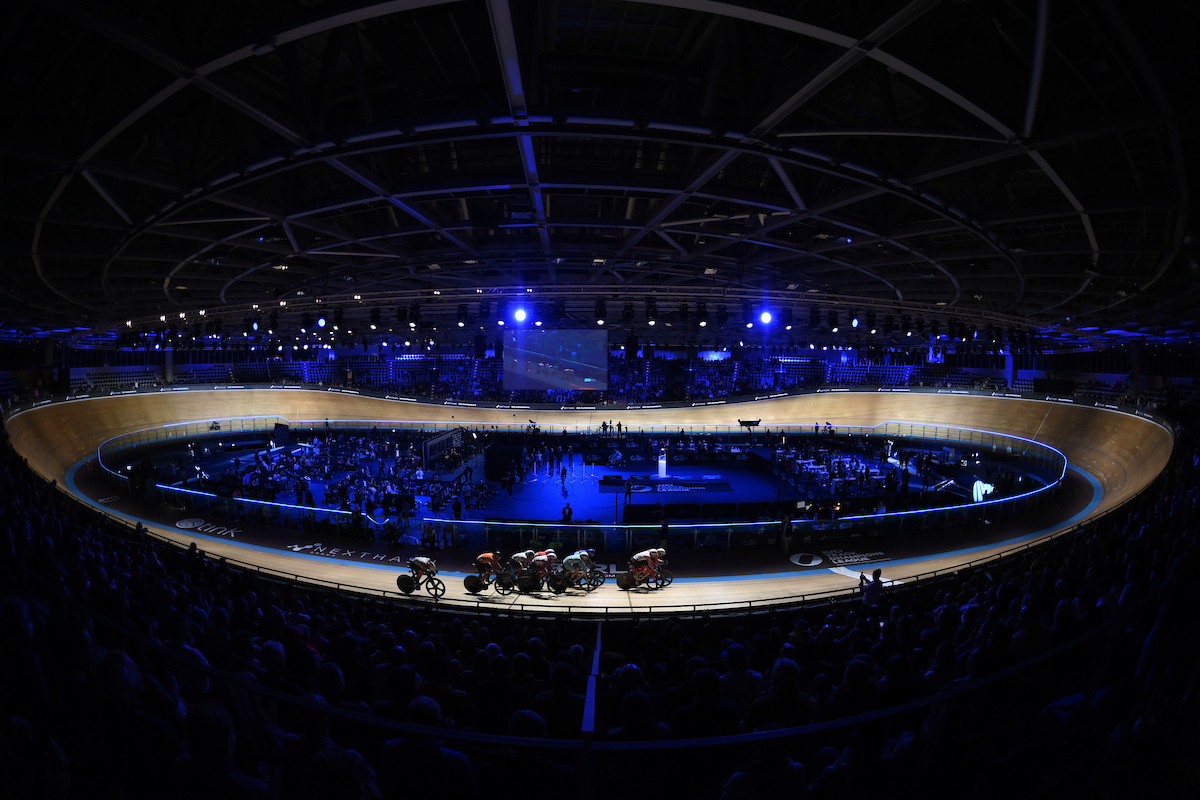 You can also buy tickets for the Saint-Quentin-En-Yvelines and London rounds NOW. 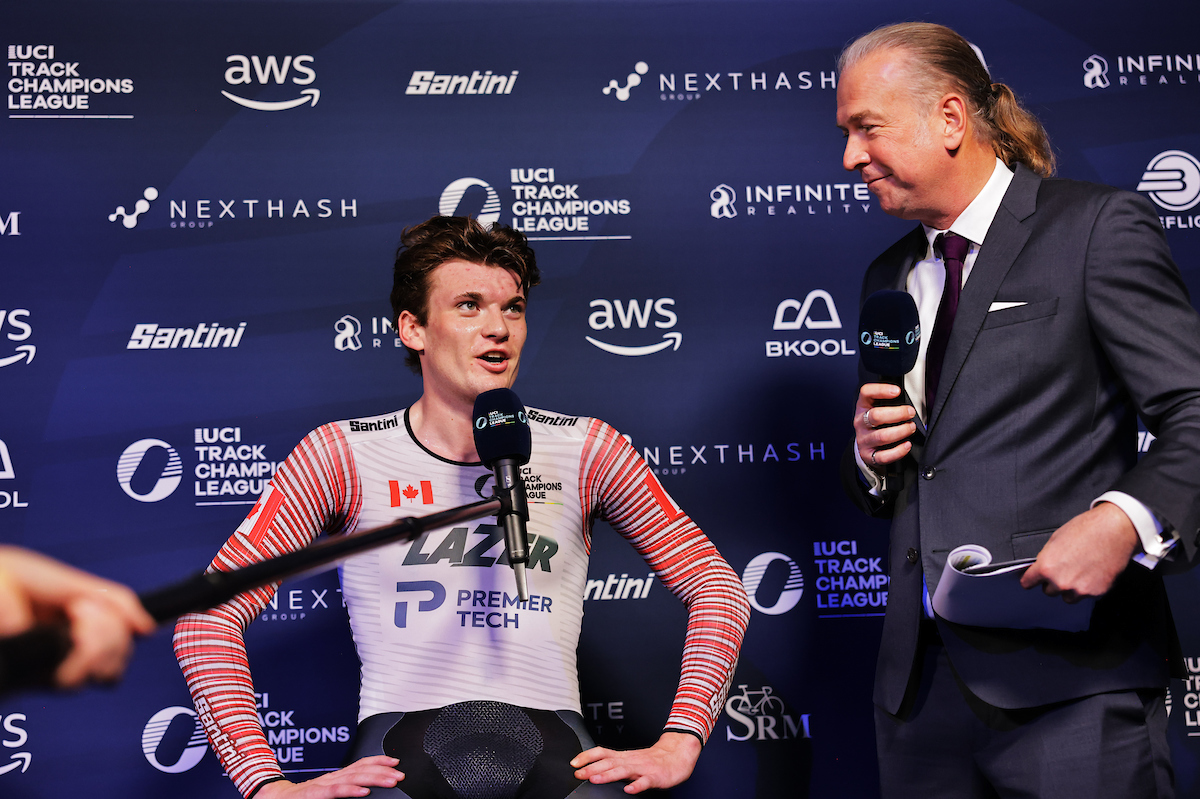 Every round of the UCI Track Champions league is broadcast live on discovery+*, GCN+ (globally), the Eurosport App, as well as on Eurosport 1.

*Streaming is available on discovery+ in Austria, Denmark, Finland, Germany, Italy, the Netherlands, Norway, Sweden, the UK and Ireland. 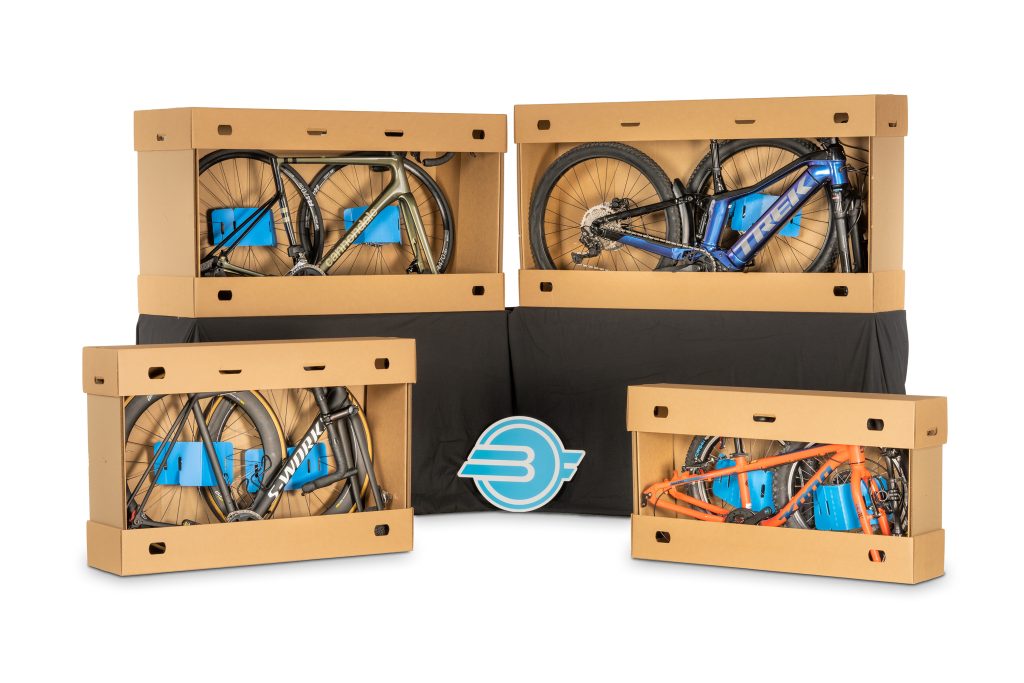