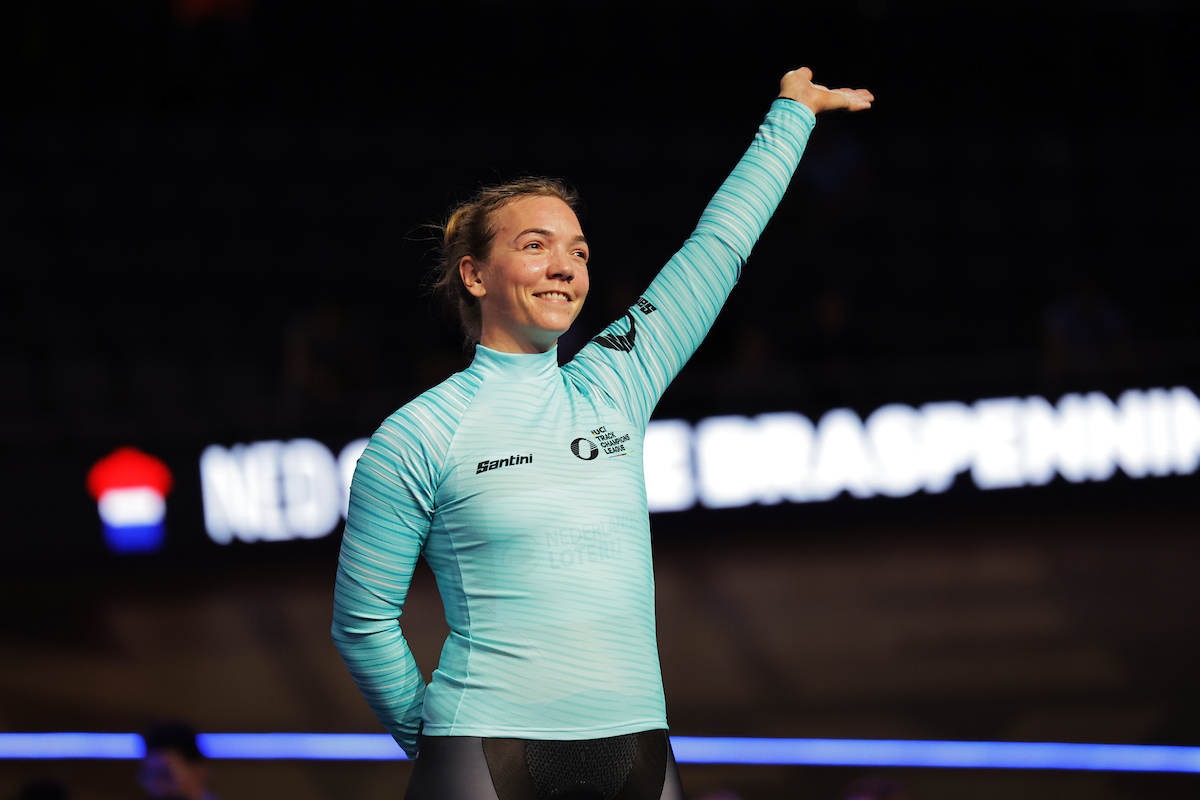 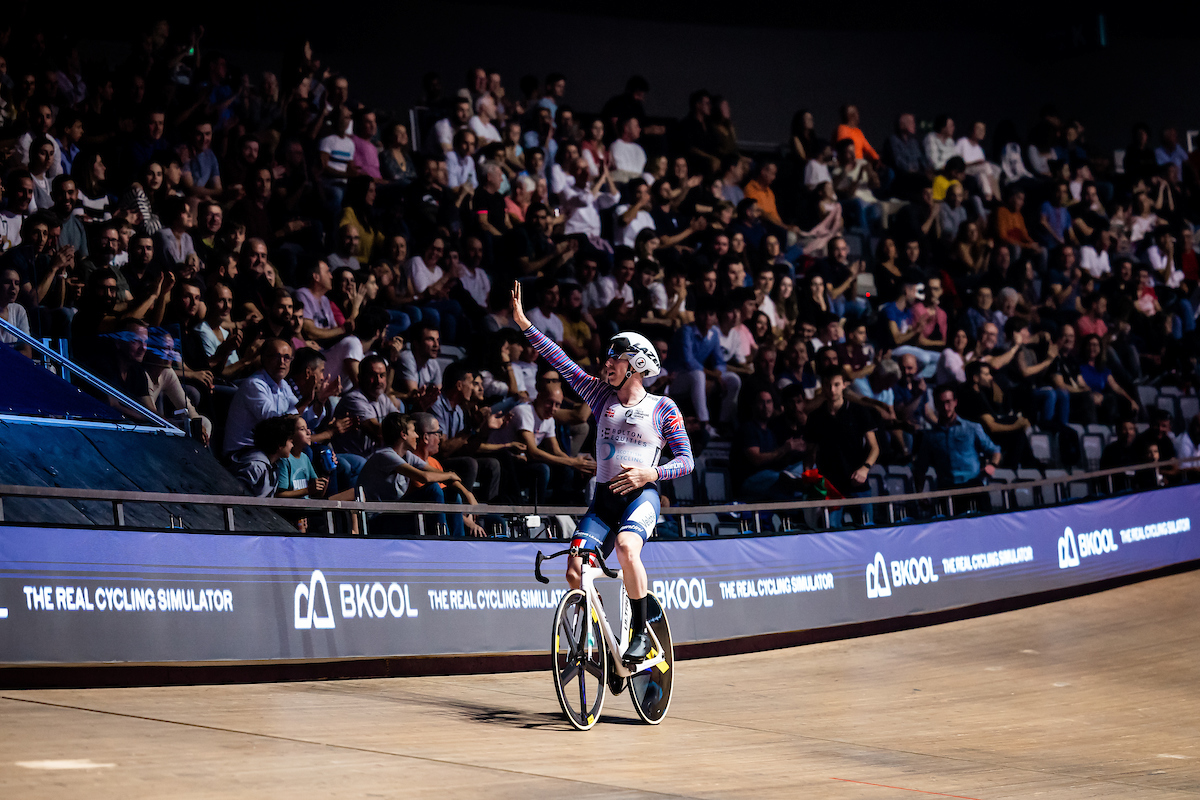 What is it like riding the UCI Track Champions League for the first time?

MS: It was daunting initially. I raced the Commonwealth Games on the track but then rocking up to the first round in Mallorca, I was like ‘wow, this is bigger than any track event I’ve done’, certainly from a production level. Even just going on to do the first race was really daunting because it was a new experience. But when you race you have this singular vision to win. It’s definitely engaging even as an athlete at the start line, you think, this is intense.

How are you feeling ahead of Berlin?

MS: I feel a little apprehensive going into Round 2 wearing the leader’s jersey, as it could be a bit of a target on my back, and I just want to take each race as it comes. My plan for Saturday is to go out and race hard, and try and race to win. I’m looking forward to riding in the Berlin Velodrom again as I’ve always enjoyed racing there because, from what I remember, the fans really get behind the riders.

Is your goal to end up being affiliated with British Cycling?

MS: I’m not really interested in that. I did it for five or six years, and it was fantastic. And it was definitely the catalyst that led me to the results I’ve had and where I am now. But at the end of the day, it’s quite a constrictive programme. You have to live in Manchester. There’s a lot of people telling you what to do. I don’t really like that. So I quite like just doing my own thing now to be honest. 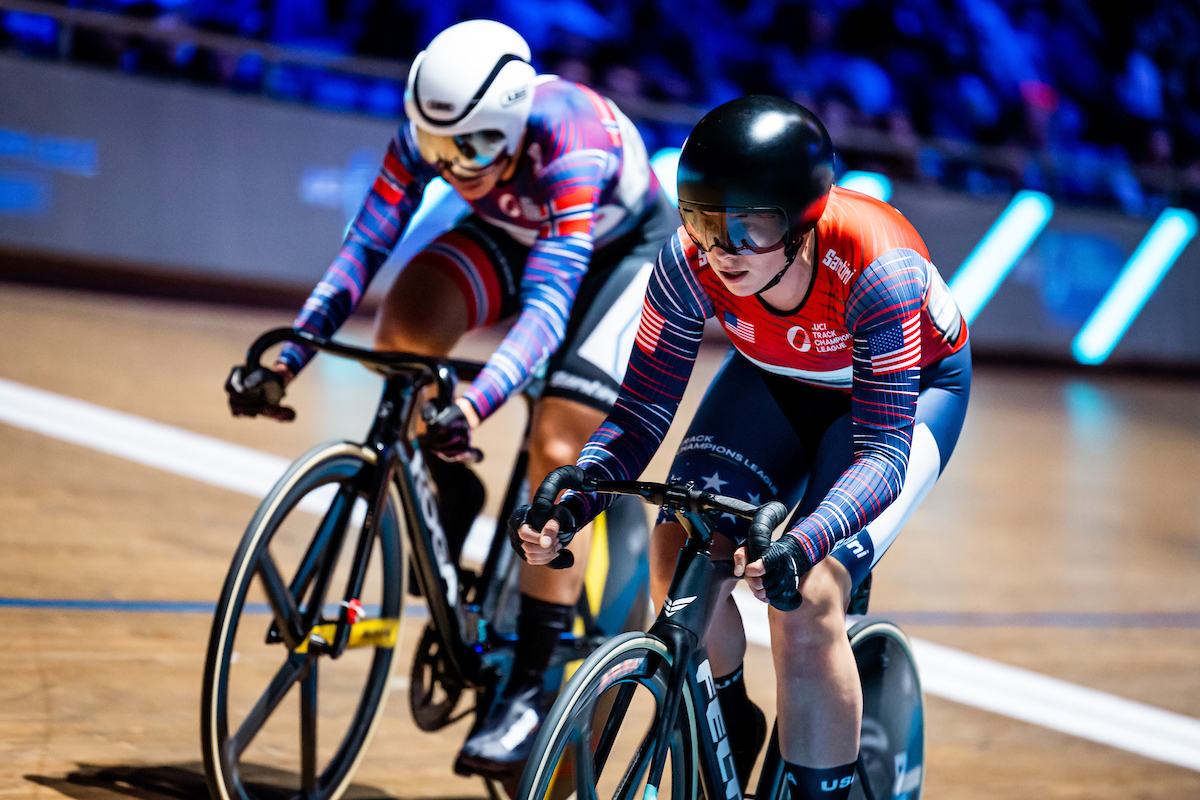 You’re top of the Women’s Endurance category after the first round. How did you find the quick-fire race format?

JV: Yeah, the format of the race scene and environment of the race scene is a lot different than I have experienced in the past. I really only have raced Nation Cups and World Championship level races. This was much different. It was a lot quicker. The racing – certainly the elimination was almost more aggressive. It was more moving around in the field.

You take a very strong lead going into the second round of the UCI Champions League. Do you think that you can maintain that advantage and perhaps even build on it going into the next weekend?

JV: I think that there’s a lot of opportunity to do well, and to do poorly in these types of races. It’s pretty easy to get caught out – a couple of riders did on the first night. The goal is simply to be consistent and race your best in each individual race. If that ends up on top of the leaderboard, then then that’s great.

How was your battle with Norwegian rider Anita Stenberg?

JV: Anita and I have been racing for a long time. I actually met her when she was in the US. It’s been really fun and going into the end of the elimination head-to-head with her is a really good battle and I think it’s good for the crowd.

She rolled me out the line which is exciting to watch for everybody else. Bummer for me, but exciting for everybody else. It’s cool to progress with someone else and kind of be in the similar places in your career. I feel like her and I actually have kind of done that the last five or six years.

How impressed are you with Anita?

JV: She’s definitely improved. I was really impressed with her actually at the Olympics. She had a really good ride, and was really strong in all those races, or all four of the Omnium races, and has continued to improve since then.

Can she compete for the title as well this year?

JV: Certainly. In the women’s field, you can’t count anyone out. After just one round, I think everybody is still in contention. Certainly anyone in the top half is in contention for the overall title right now.

How are you feeling ahead of Berlin?

JV: I’m feeling good heading into Round 2 in Berlin. The UCI Track Champions League is a long competition but I’ll try and keep my consistency rolling. To be in the leader’s jersey without winning any of the races in Mallorca was a little unexpected, but it’s certainly a good start and I hope to ride well again this weekend. 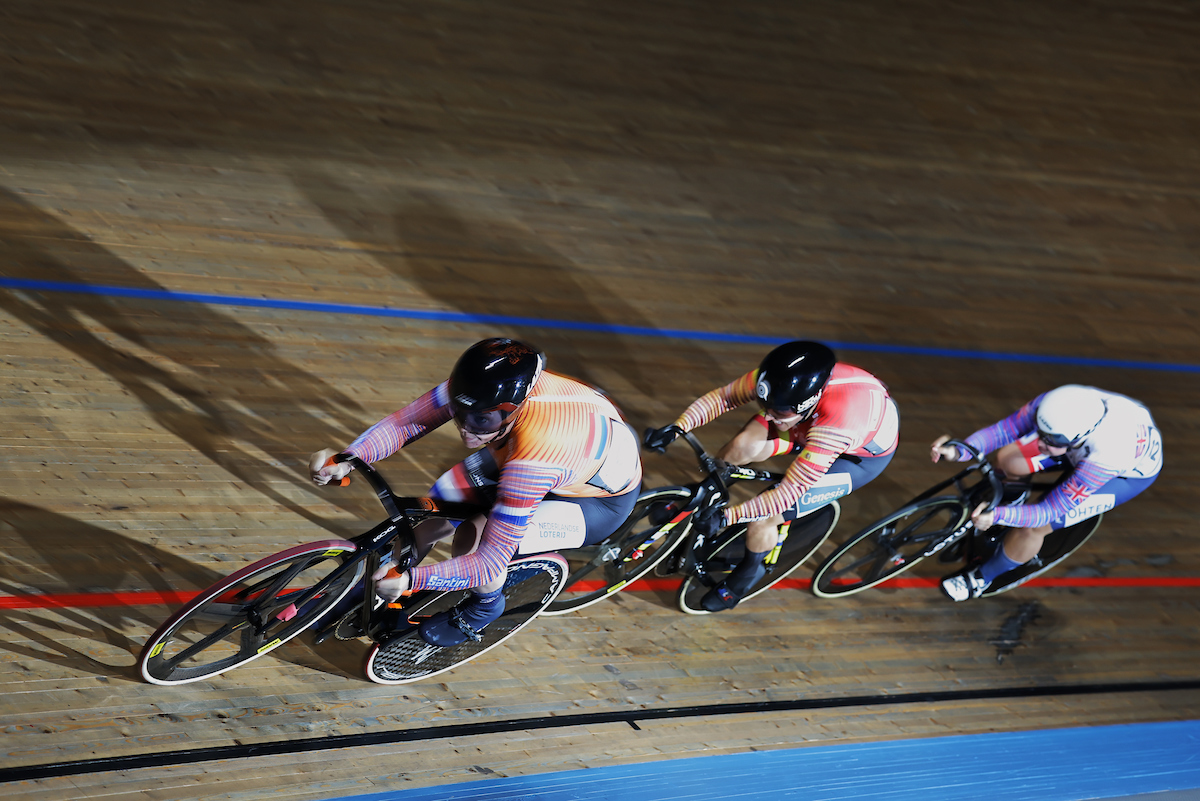 What are your thoughts ahead of Round 2 in Berlin?

SB: It’s going to be a good feeling to ride in the leader’s jersey in Berlin. I hope the fans will go wild on Saturday night because they are always a special kind of crowd. My legs have recovered well from Mallorca and I hope to go full gas again this weekend and keep the leader’s jersey on my shoulders.

You’re the blue jersey leader. How are you looking forward to competing as the leader in Berlin?

SB: I think it’s gonna be a good feeling to ride in the jersey. I hope the crowd goes wild. And [as] Mark [Stewart] said that the Berlin crowd is a special kind of crowd so I’m curious.

I hope [my legs] recover and that I’m able to do a full night again and to keep the jersey on my shoulders.

What do you think of the level of sprinting in this round in Mallorca?

SB: Yeah, I think it’s quite high because everyone just had the Tissot UCI Track World Championships. Everyone took a few weeks off – one or two. You come out of a rest period, and I think everyone’s still hungry or more sharp to get some more racing and UCI Track Champions League format is a real good format for that.

Is it possible to peak for the last two races in London?

SB: I think it’s more about the consistency how you do [at each] round. Maybe you get more into the flow of how every round goes. Then you can improve some but still your form is how it is now. [It’s] how you bring it towards the end of the rounds. 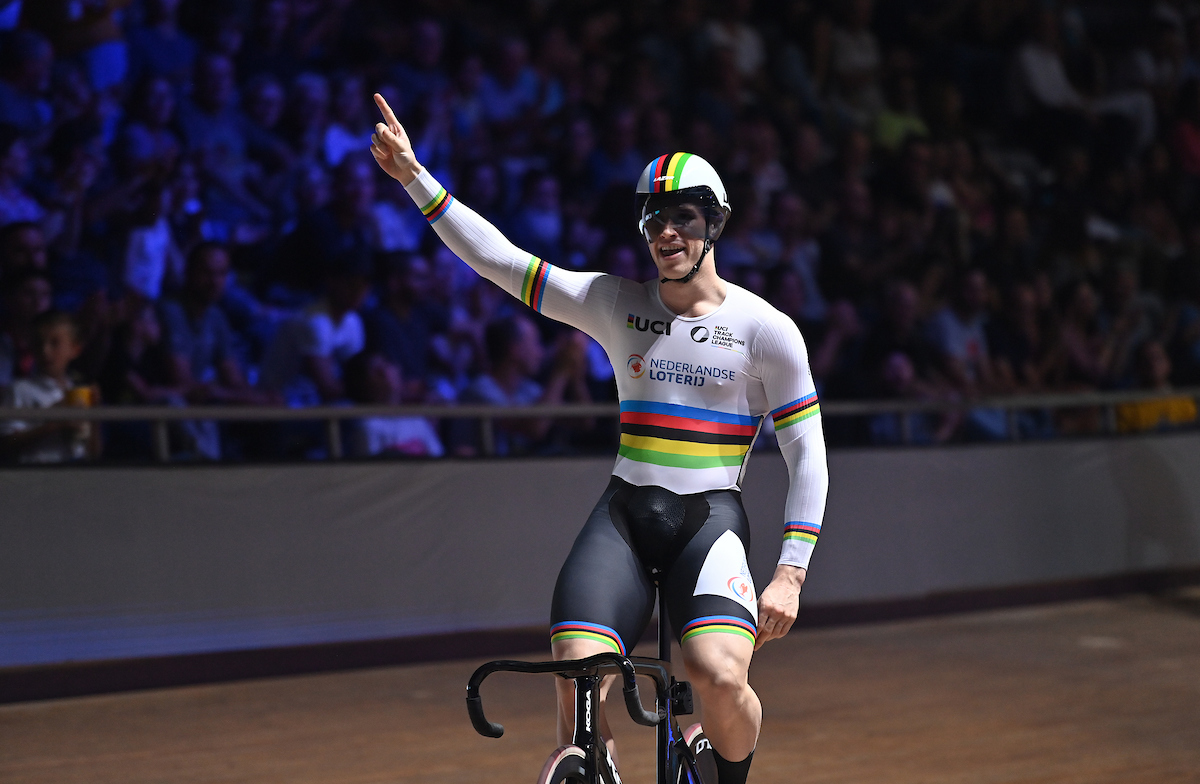 There’s quite a healthy rivalry developing between yourself and Matthew Richardson. How do you feel about that?

HL: I think it’s great. I haven’t raced against him in the last years. I think first time was in Glasgow – the Tissot UCI Track Nations Cup.

I’m actually happy we can race a bit more at the moment because if I was only doing some racing in Europe, I would never race against him. So I’d like to get to know him and what he’s doing on track and probably also [he’s] going to get to know me.

I think it’s nice to have some good challenges. I think it will be really hard for me competing [in the] next few weeks.

What are your reflections on Round 1?

HL: Mallorca was great and I’m super happy to be travelling to Berlin with the leader’s jersey on my back. Winning the Keirin felt incredible and it’s given me confidence going into the rest of the series, but in the Sprint final I was totally empty. It was a shame to lose to Matthew Richardson in that race and I hope I can take revenge on him this weekend. There will definitely be more competition in Round 2. Jeffery Hoogland is another rider who’ll be tough to beat and I am sure Stefan Bötticher will want to ride well in front of his home crowd. It’s a really strong field.