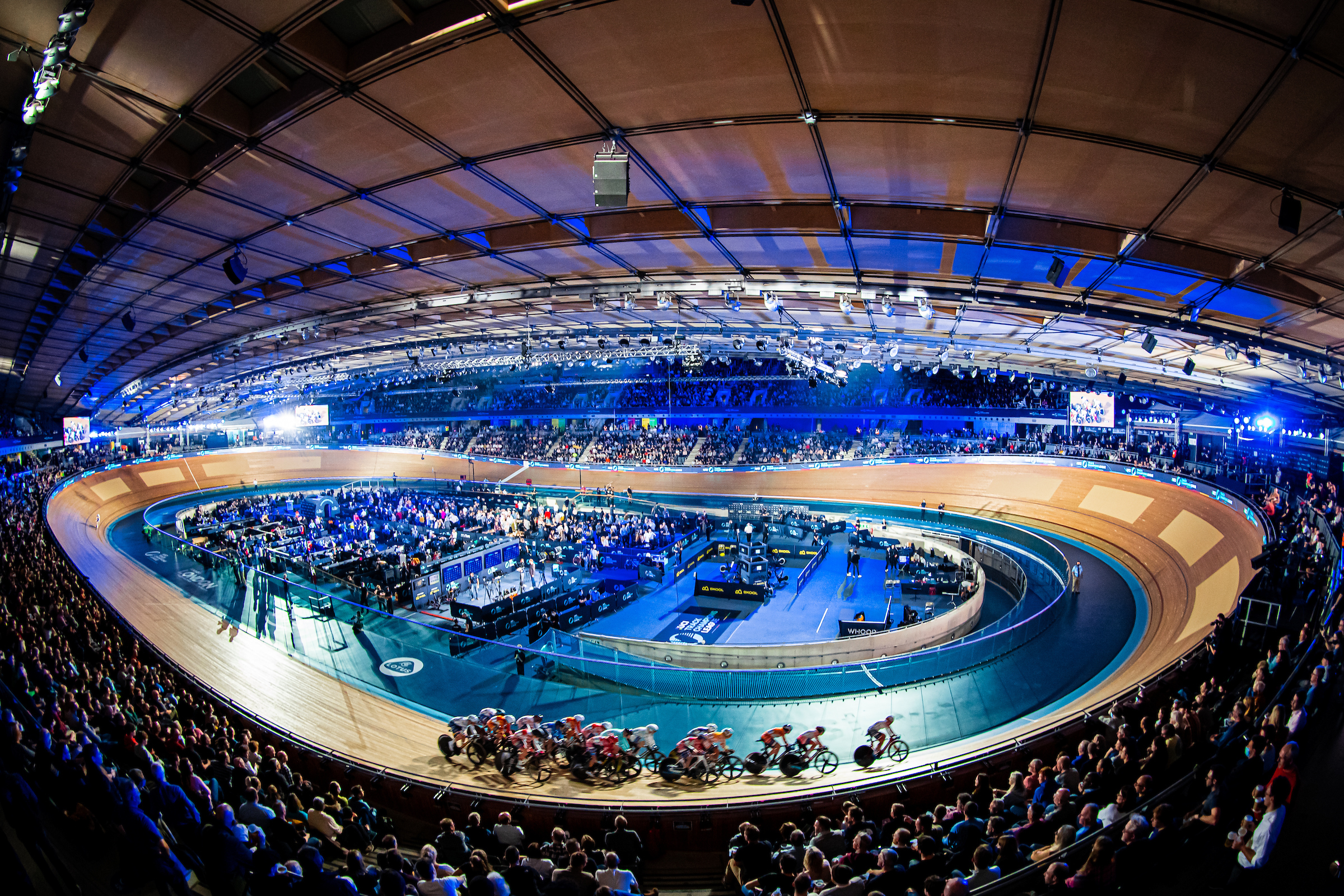 A BEGINNER’S GUIDE TO TRACK CYCLING

Whilst track cycling is one of the fastest, most competitive and exciting sports in the world, we realise there’s a lot of information to take on board if you’re new to it, and that’s exactly why we’ve created this easy-to-understand guide which will allow you to know exactly what’s going on: 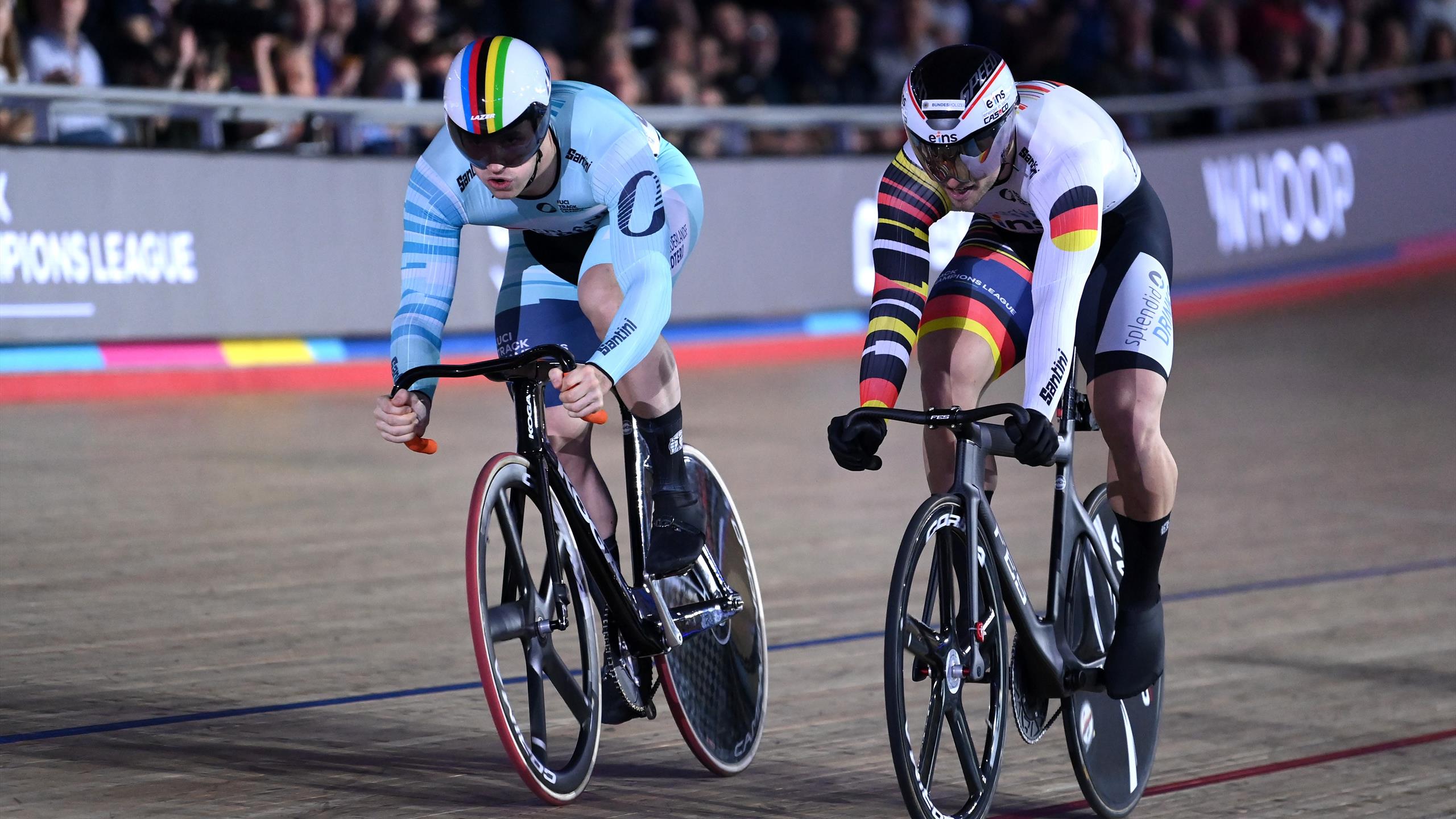 What are the differences between Sprint and Endurance riders?

In track cycling there are many different races, but ultimately there are two types of riders. A rider who specialises in the Sprint events will usually be more muscular, allowing them to exert more power in short and intense efforts. An Endurance rider will be built more like the typical road cyclist, lean and light and able to sustain fast speeds over longer distances.

Can riders compete in both Sprint and Endurance races?

Typically, riders specialise in either Sprint or Endurance categories. Sometimes riders will switch from one category to the other over the course of their career, but never mid-way through the UCI Track Champions League.

Do riders compete for themselves, their trade teams, or their countries?

In the UCI Track Champions League, riders compete for themselves, but when they race, they will do so in their national colors. 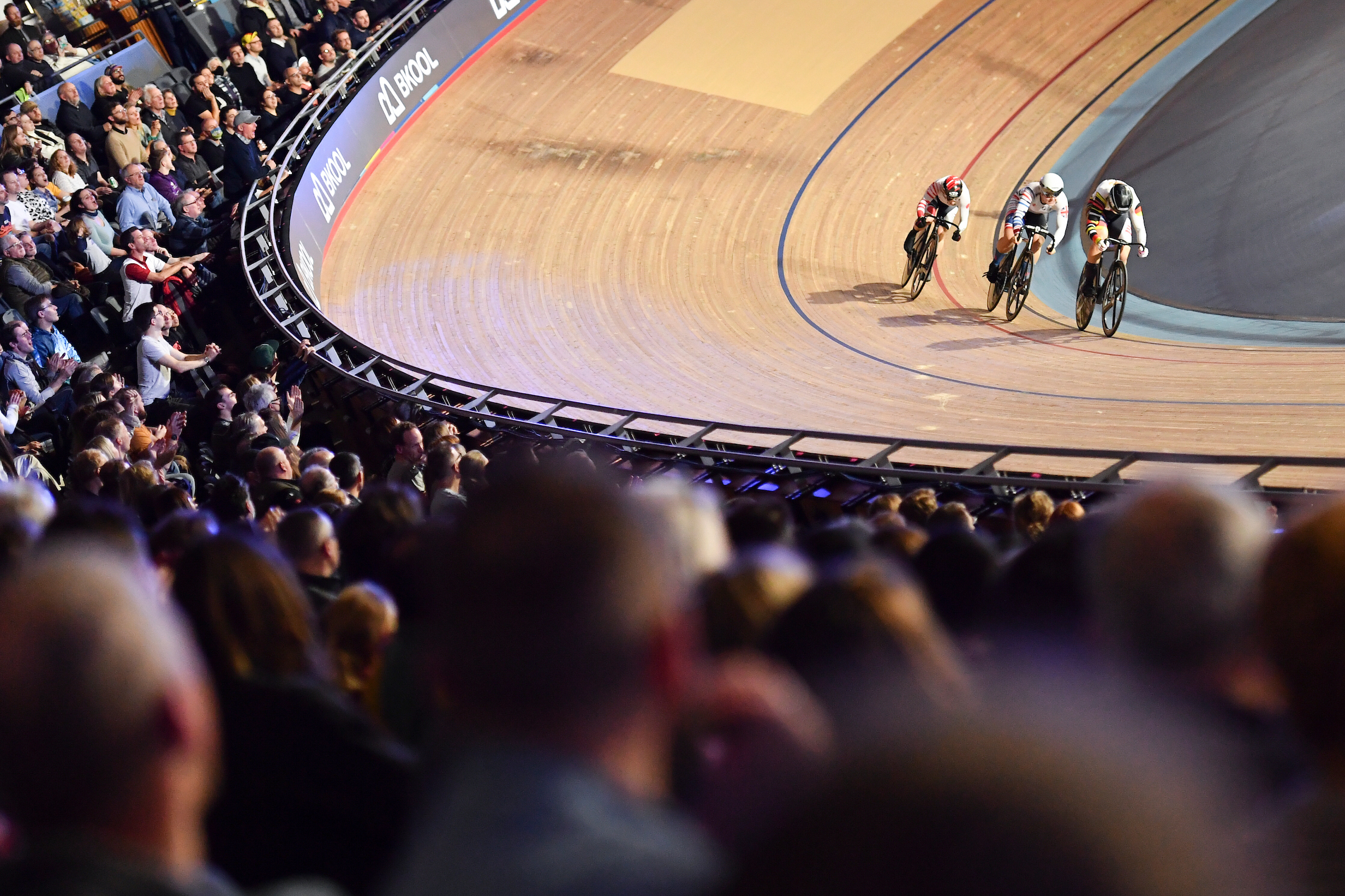 What do the lines mean on the track?

Black line – This line represents the shortest and fastest distance around the track. Riders try to stay on this line as much as possible whilst they’re racing.

Red line – If a rider is trying to overtake someone who’s riding in the sprinter’s channel (the space between the black and red lines), then they have to do so at a safe distance. Riders have to be above the red line if they’re overtaking someone in this channel. The red line is also called the sprinter’s line.

The finish line – This runs across the width of the track and is positioned towards the end of the home straight. It is used as the finish line in all disciplines in the UCI Track Champions League. 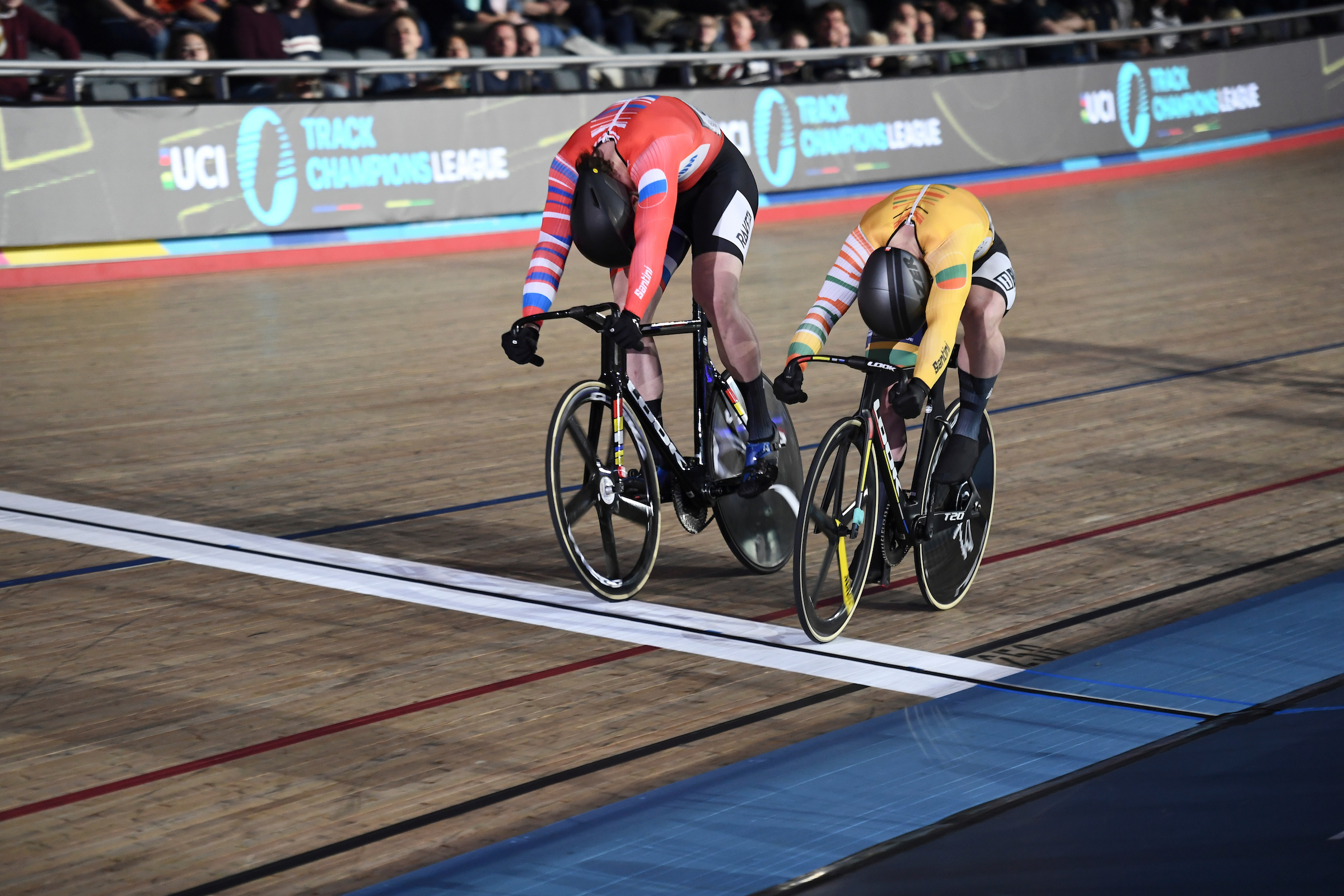 What are the different races featured in the UCI Track Champions League?

The Scratch race is very simple. It’s a mass start race over 20 laps in the UCI Track Champions League. The first rider to finish wins.

In the Elimination race, the last rider to cross the finish line in every other lap will be eliminated from the race. The first lap will be a neutral lap and all 18 riders will take part from the off. The last rider left in the race wins.

The Keirin sees riders follow a derny bike (find out about derny’s below) which increasingly gathers speed over two laps. After setting the pace, it will pull off the track leaving the riders to sprint to the finish over the remaining three laps.

The Sprint sees two riders battle against each other over three laps. The riders start side-by-side and try to manoeuvre themselves into the best position. Sometimes this means that riders will stop dead on the banking as they try to psyche each other out. Eventually they will start sprinting and the first riders over the finish line at the end of three laps is the winner.

Out of all the different track cycling disciplines, the four races which feature in the UCI Track Champions League are the easiest for new fans to understand. Our aim is to make track cycling more accessible and exciting than ever before. 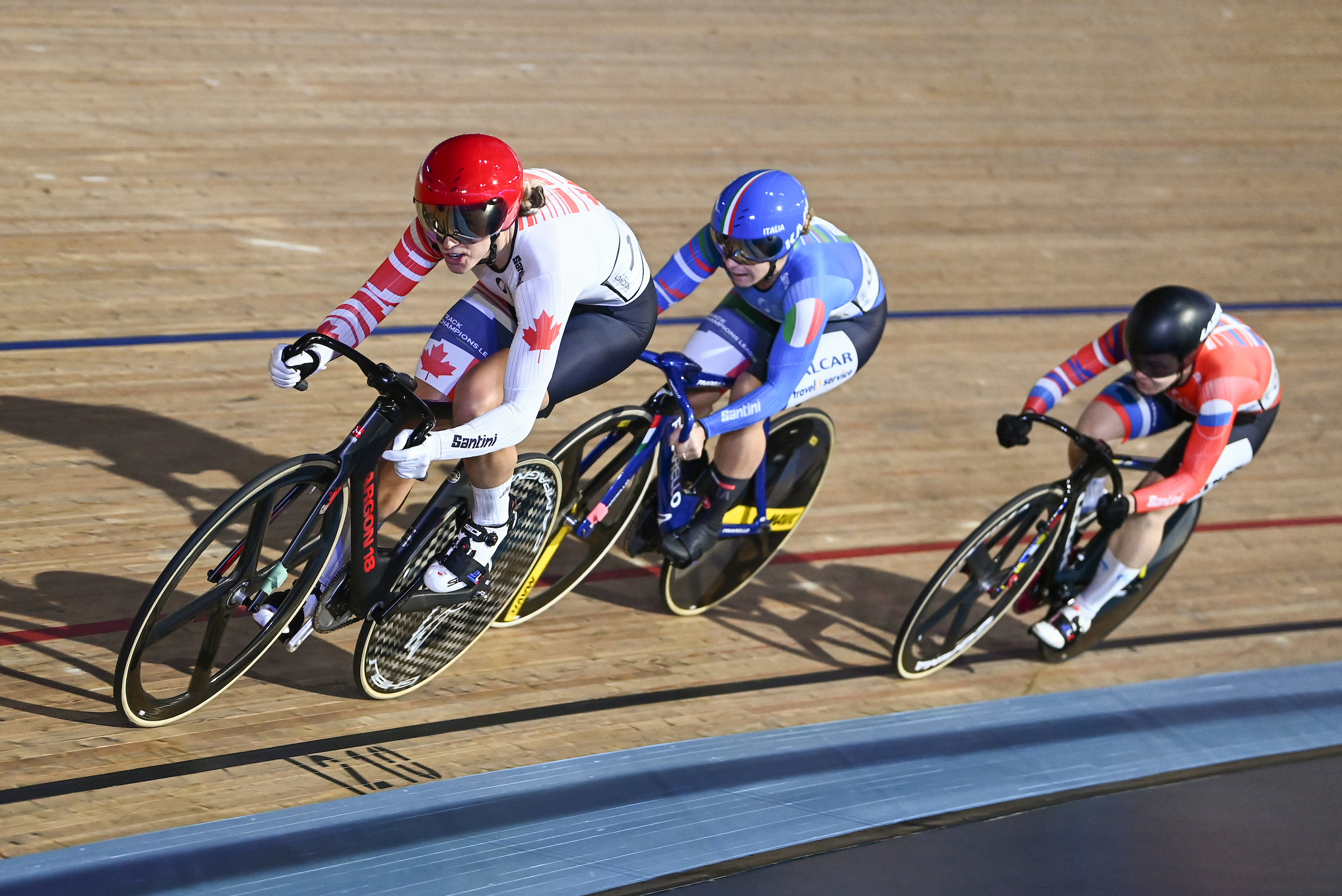 Banking – The banking is the steep turn at each end of the velodrome. It rises at an angle of approximately 45 degrees and allows riders to keep their bikes at around a 90 degree angle to the surface while riding at speed (see below for more information on why tracks are banked).

Derny – A derny is a motorised bicycle used to set the pace over the first two laps in Keirin races.

Skinsuit – A skinsuit is the clothing worn by riders, and its tight fit is designed to be as aerodynamic as possible.

“Smashing the pedals” – This is a term which is used when riders are competing as hard as they can, putting as much power as possible through their pedals.

Track stand – This is when riders come to a complete stop whilst competing in Sprint races. Riders sometimes do this at the start of Sprint races in order to get their opponent to move in front of them, meaning they can then draft behind them in the laps which follow, conserving energy in the process, before attemoting to overtake them in their final sprint to the line. 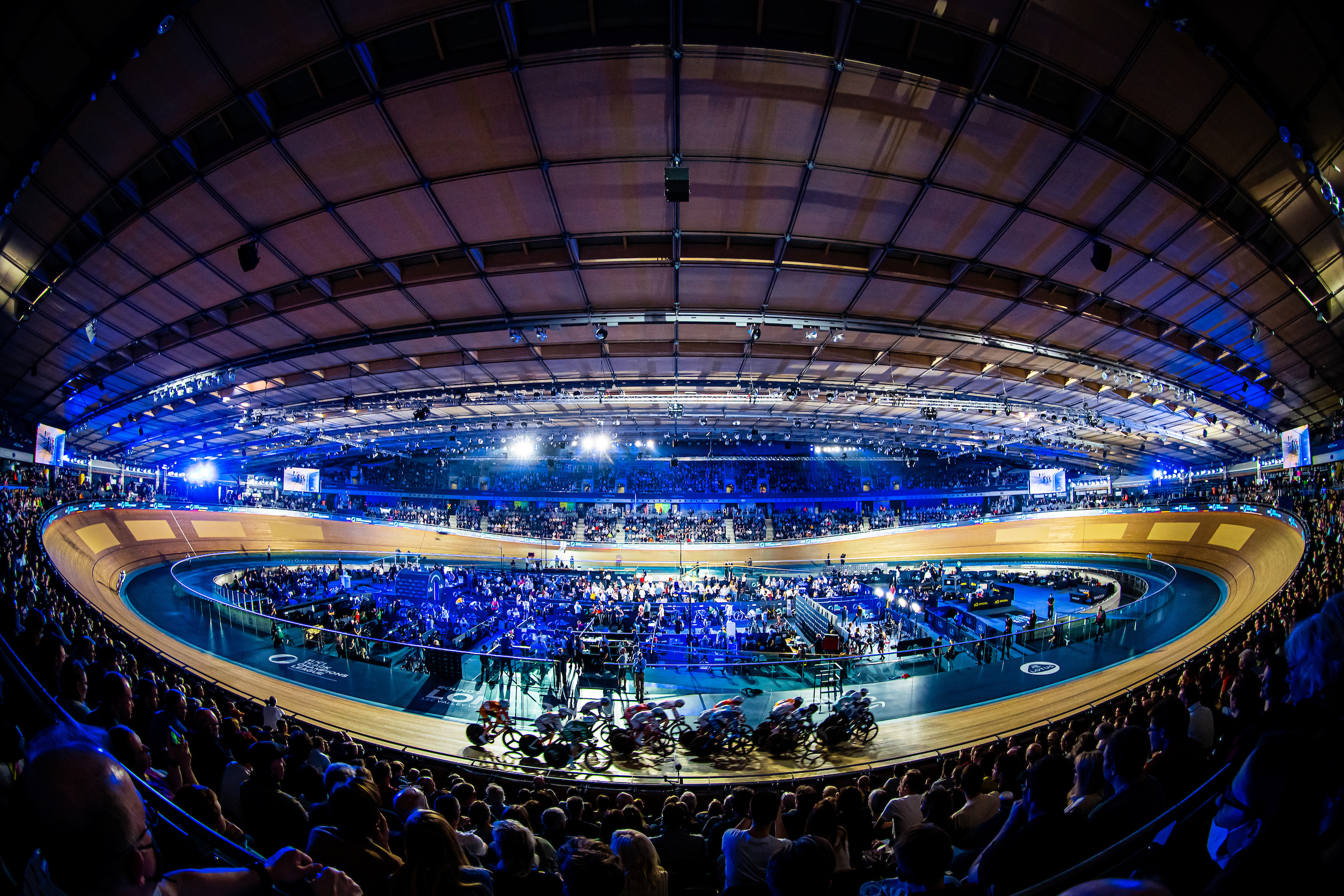 How long is a velodrome?

Every velodrome used in the UCI Track Champions League is 250m long.

What was the highest speed recorded during last season?

Last season, the top speed recorded was 75kph, which was achieved in the Men’s Keirin event by Stefan Bötticher.

What is a velodrome?

A velodrome is a type of sports stadium that houses a closed-looped cycling track.

Why are tracks made of wood?

Wood provides a consistent level of grip and its natural absorption properties mean it’s safer than harder materials if riders fall during competition. Tracks are made from thousands of small wooden strips which can easily be repaired or replaced if damage occurs to them.

What type of wood are tracks made from, and why?

Siberian Pine is the typical wood used for the boards of a track because it is densely grained and is relatively knot-free. That means it has the strength and flexibility required for optimum racing, and is easy to shape into the classic curves.

Why are the tracks banked at either end?

The banked curves create a centripetal force which pushes riders inwards whilst they are racing. This this keeps the riders’ momentum going and also allows them to keep to the shortest and fastest positions on the track more easily.

What’s the difference between a road bike and a track bike?

There are several differences between road bikes and track bikes. Unlike a road bike, track bikes only have one, fixed gear, as they don’t need multiple gears. Track bikes do not freewheel either, meaning that if the bike is rolling, the pedals will always be going around too. This is to ensure track bikes are as fast as possible. Technically a track bike doesn’t have brakes either. If riders need to stop, they have to use their legs to resist the forward momentum of the pedals.

How do I know who’s winning the UCI Track Champions League?
The overall leaders of the Men’s and Women’s Sprint and Endurance competitions in the UCI Track Champions League are awarded a blue jersey at the end of each round. The have the honour of wearing that jersey in the next round they race, and at the end of the season, they are awarded it as a prize, just like the yellow jersey in the Tour de France.